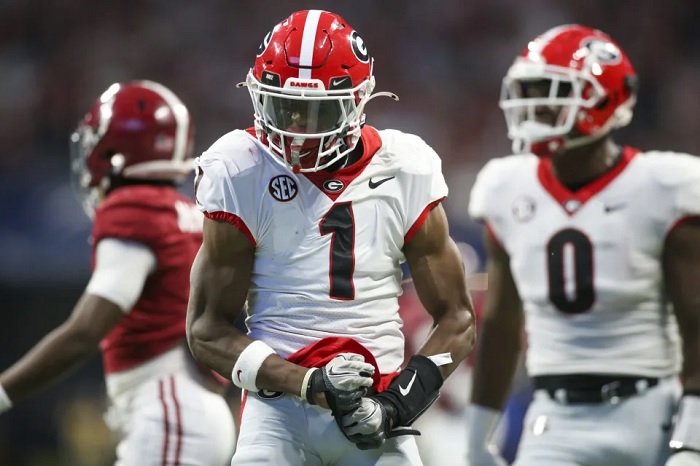 With Alabama and Georgia meeting each other for the third time this season. This marks the last opportunity to watch what might become Chiefs NFL Draft Prospects.. This group of prospects includes players from each of Alabama and Georgia. We’ll take a look at a versatile safety, a run-and-hit linebacker, a size-and-speed wideout and an elusive running back.

As a true freshman in 2019, Pickens burst on the scene in the SEC, recording 49 receptions for 727 yards and eight touchdowns.  This season, Pickens only returned to action from a knee injury at the onset of November, appearing in just three games for the Bulldogs, catching four passes for 55 yards.

At 6-3 and 200 pounds, Pickens has the size that the Chiefs have really been lacking at the outside receiver position. He has the route-running prowess to get open on deep and intermediate routes and does a good job of attacking the ball in the air against man coverage. He’ll need to add some good weight to his frame in the NFL, but he plays with physicality, especially as a blocker.

A fifth-year senior at Alabama, Robinson paid his dues waiting for his shot to be the lead back for the Crimson Tide. Appearing in 13 games in 2021, Robinson got the lion’s share of the carries with 248 for 1,268 rushing yards and 14 touchdowns on the season. Add in his 32 receptions for 268 receiving yards and he has more touches in 2021 than in his last three seasons combined. The crazy thing is that he managed this behind an offensive line that saw some minor struggles this season.

Robinson has speed, balance and toughness to boot, forcing missed tackles and racking up the yards after contact throughout his career in Tuscaloosa. At 6-1 and 226 pounds, the redshirt senior would have more size than any running back in Kansas City. Should he be available later on in the draft, the Chiefs should absolutely consider taking a chance on this player.

Battle is the starting strong safety for the Crimson Tide defense as a true junior. At 6-1 and 210 pounds, he has the size that NFL clubs are looking for in the secondary at the next level. While his physical traits pop off the page, his football IQ has improved in his three years at Alabama. He’s a great tackler, who takes smart angles to the football. The biggest development this season has been his ball skills, with three interceptions, including two pick-sixes on the year.

Battle would really be the perfect option to replace Daniel Sorensen for the Chiefs. He has the size, versatility and athleticism to both play the deep safety role, but also roll down into the box in certain defensive looks and sub-packages as Sorensen currently does for Kansas City. He’ll have to get used to some of the man coverage looks that Kansas City runs, but there’s no reason to believe he doesn’t have the skill set to improve in that regard.

Tindall might not garner the headlines that his running mate Nakobe Dean does, but he’s still a key cog in a dominant Georgia defense. At 6-2 and 230 pounds, he is a rangy linebacker best-suited for the MIKE or WILL position at the next level. Appearing in 14 games for the Bulldogs in 2021, he amassed a career-high 59 total tackles, six tackles for loss, 4.5 sacks and one forced fumble.

Tindall’s best trait is his quick downhill trigger. He’s explosive and does a good job working through the trash to get to the ball carrier. He’s technically sound too, boasting a really nice scrape technique. His ability to blitz will be appealing to a coach like Steve Spagnuolo, but one area where he’s going to need improvement and development is the passing game. He has the speed to do a good job there in the NFL, but he needs more reps and coaching to reach his full potential against the pass.

Related Topics:kansaas city chiefs
Up Next