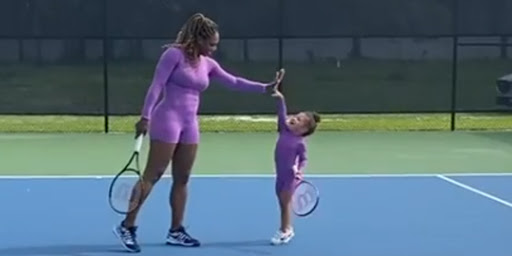 Serena Williams has a really special and cute bond with her daughter, Olympia. The tennis queen often posts about her daughter’s day-to-day activities on Instagram and Olympia too loves to have fun with her.

Interestingly, it is not just Olympia who has an Instagram official account but even his Qai Qai doll has its own Instagram account. It is the doll with which Serena Williams’ daughter enjoys playing every time and thus, Serena or Alexis posts all of Olympia’s fun activities on this Instagram account.

Recently, the Qai Qai doll’s account posted a picture of Olympia in which she is trying to swing a tennis racquet. Even though she is holding no racquet, she is in the air as if she is trying to hit a forehand.

“A star in anyone’s eyes,” wrote one of her parents in the Instagram caption.

Intriguingly, one can also see a lot of tennis balls in the background along with the Qai Qai doll. Olympia surely was about to practice or did some training before this picture was taken. It reveals that one day, fans can also witness her on the court- playing some superb forehands just like her mother.