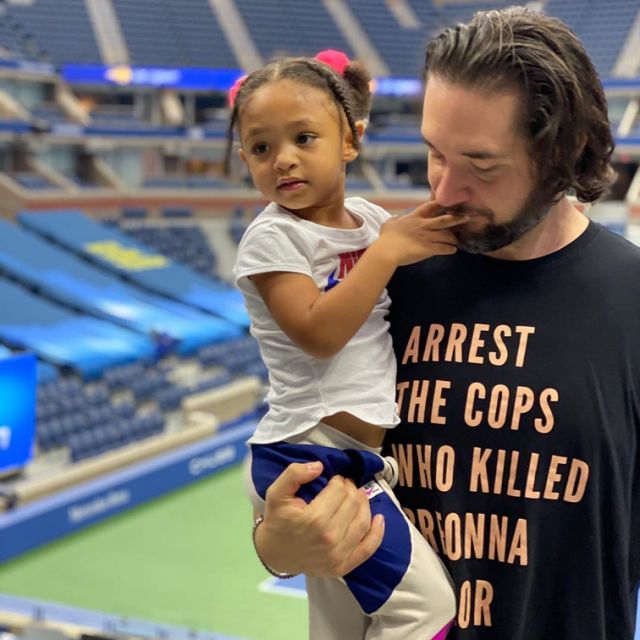 Alexis Ohanian, who shares an adorable daughter with Serena Williams, is broaching the topic of paid paternity leave once more, this time with reference to the ongoing pandemic. The Reddit cofounder and former board member wrote an article for Fast Company, sharing that as his daughter just turned 3, he found himself reflecting on those early days of parenthood and what having a paternity leave meant for him and his family.

“After she was born, I took four months of paternity leave, which was Reddit’s company policy . . . I wanted to set an example for all of our hundreds of employees-not just the men, but especially them,” he wrote. “While a small fraction of U.S. companies (9%) offer paid paternity leave, the stark reality is that many men don’t take advantage of the opportunity, due to a looming stigma and fear of losing their standing-or, even worse, their job. Unfortunately, those fears are not unfounded and that stigma is very real.”

You KNOW I wasn’t gonna leave this alone without speaking out on it. 📣 I saw the ex CEO of a fitness brand allegedly disparaged a male colleague who was contemplating taking paternity leave… So I wrote this on @olympiaohanian’s 3rd bday bc we need to end this absurd stigma against men taking paternity leave. After multiple surgeries that my wife barely survived, what kind of man WOULDN’T absolutely want to take paternity leave (if he’s lucky enough to have access) to be there for his fam? Besides, it should be available for EVERY American for EVERY birth. Not just wealthy CEOs + founders like me and not just for childbirths with complications. Thank you to @dovemencare for taking a stand on this issue and I know the fight for Paid Family Leave (and destigmatizing men taking it) will require lots more corporate leadership. Shout-out to my guy @chancetherapper for very publicly taking paternity leave himself. And while we’re on the subject.. there’s a black maternal health crisis in the US and COVID19 has only exacerbated it. Shoutout to members of Congress like @replbr who are doing the work to fight + fix this, but there’s A LOT to be done.

“Those comments are symptomatic of a larger societal sentiment and evidence that there is still so much work to be done,” he wrote. “The implication that paternity leave is unimportant sets a dangerous precedent, one that suggests fathers are not an integral part of the child care unit, and perpetuates the antiquated belief that mothers alone should be the primary caregivers. Worse, explicitly (or implicitly) telling a male employee that they’re less of a man for taking time to be with their family after their child’s birth is as stupid as it is outdated. Showing up is exactly what fathers should be doing for their families. Now is the time to eliminate the stigma associated with paternity leave, once and for all.

“Now is the time to eliminate the stigma associated with paternity leave, once and for all.”

In light of the ongoing pandemic, Alexis feels that Americans are now seeing what fathers can accomplish for their families while at home – when they’re given the opportunity – and says that if paternity leave were normalized, more men would feel empowered to take it, thus destigmatizing it in the process.

“The benefits of normalizing paternity leave have a much greater impact beyond the father himself. Studies have shown that when men are able to take paid leave, they can help close the gender pay gap. In Sweden, where they provide equitable parental leave policies and encourage fathers to take leave, research shows a mother’s earnings can rise by about 7% for each additional month her spouse is able to take leave,” he wrote, adding: “Not only does equal parental leave benefit the family, but it can also benefit the company by attracting and retaining talent. A study conducted by Promundo, an international nonprofit, finds that 77% of millennial men have or would be willing to change jobs in order to better manage fatherhood responsibilities with career responsibilities.”

Hugging loved ones even harder today.

Alexis believes that change has to start from the top – not just in terms of executives introducing paid family leave policies for their companies but also with said executives taking leave themselves and then encouraging their employees to do the same. “This sends a clear message that the policies are more than just lip service, or an HR box checked-they’re a concept the company truly believes in.”

Home lives have been more chaotic than ever for parents since the pandemic began in March, and Alexis feels that this unprecedented time in our country’s history is further proof that more needs to be done to support families. Equal paid family leave is just one of the things that could help, but as it stands, “the U.S. is the only industrialized country that doesn’t provide some form of paid family leave. It’s time to change that.”

Lebron James, I Want You to Match And Double That Reward : LA Sheriff Alex Villanueva