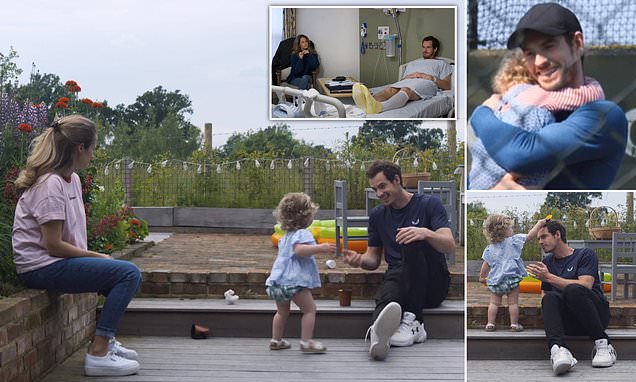 Andy Murray has given his fans a rare insight into home life with his wife Kim and their eldest daughter Sophia. Taking to his Instagram Stories on Tuesday during a match in the Barcelona Open, the former men’s world number one revealed that his daughter is not impressed with his tennis skills. “Just watching some of the Barcelona tournament on the TV with my daughter… ‘Daddy, do you like orange tennis?'” To which Andy replied: “Errmmm not really poppet.” It seems “orange tennis” was used to describe the orange clay surface used on the courts in Barcelona.

“Daddy, you’re rubbish at orange tennis,” Sophia went on to say, while Andy’s wife Kim injected with, “Actually, Daddy’s quite good at orange.” Making a stand, their three-year-old daughter hit back: “No daddy’s rubbish at orange tennis.” Clearly amused by their interesting conversation, Andy concluded: “Bit harsh but she’s got a point.”

Earlier this year, 31-year-old Andy revealed his plans to retire from his tennis career. The former tennis champion said he intended to bow out following Wimbledon in June, but admitted he feared that January’s Australian Open could be his last tournament.

Over the past 12 months, Andy has been struggling to recover from a hip injury and surgery, and revealed at a press conference in Melbourne that he has been in pain while he plays. “I’m not sure I’m able to play through the pain for another four or five months,” he said.

It’s been a busy few years for Andy, who announced the birth of his second child, a baby girl called Edie. Andy recently revealed that the thought of his children had kept him going. “I have spoken to my wife a bit about it,” the tennis ace said. “One of the things that I would like to do is play until my eldest daughter is able to watch me and have a small understanding of what it is I’ve done for my living.” He added: “That’s one of the things that’s motivated me to keep playing. That would be cool if she can come along and watch me hit some balls or practice, just to see what it is I do.”

Roger Federer made his beautiful family a priority – Nick Bollettieri