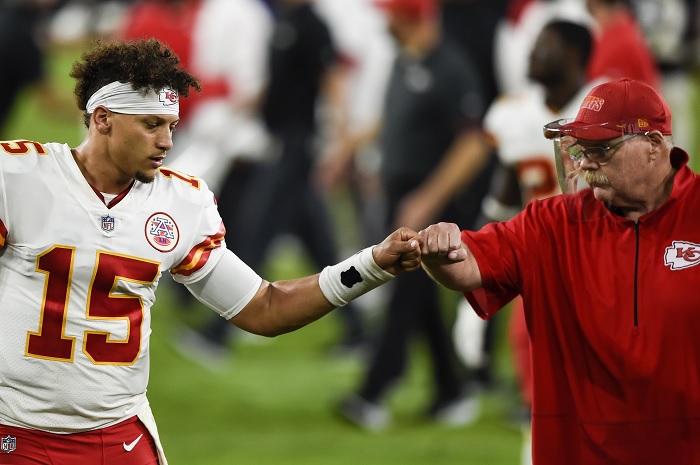 With the regular season in the books, Reid examined Patrick Mahomes’ growth in Year 4 as the team’s starter.
Mahomes finished the season with 4,839 yards, 37 touchdowns and 13 interceptions.

“He’s done a nice job with it,” said Reid. “In that fifth year, sixth year, you’ve got a pretty good grasp of the defenses you’re going to see and it’s a matter of fine-tuning it and staying fresh on the new things you put in each week.

I think he’s handled that against a lot of looks whether it’s zone or man so it’s important.

“You’re always learning as a football player, period, and coach, so it’s been a good year for him that way. He’s really turned out some pretty good numbers and wins and all those things, so he’s had a good year.”

Reid then focused on the Chiefs’ first playoff opponent, the Pittsburgh Steelers.

The Chiefs will play the Steelers in the Wild Card round on Sunday night. They project to be much healthier than they were when they came into Arrowhead Stadium two weeks ago.

The player to watch is outside linebacker — and likely defensive player of the year — T.J. Watt, who was battling a rib injury and was limited in the first game against Kansas City.

“He sure looked healthy yesterday,” said Reid of Watt, before shifting his attention. “I wouldn’t slight 56 (Alex Highsmith) on the other side either. They’ve got good rushers, number 97 (Cameron Heyward) is a Pro-Bowler too and big-time players.

“That’s a healthy defensive front that can bring it — and Watt is one of the best in the business at it — so yes, I would tell you that we need to be aware of them.”

He also believes the Steelers are playing better than they were two weeks ago. After the embarrassing 36-10 loss to Kansas City, the Steelers rattled off division wins against the Cleveland Browns and Baltimore Ravens.