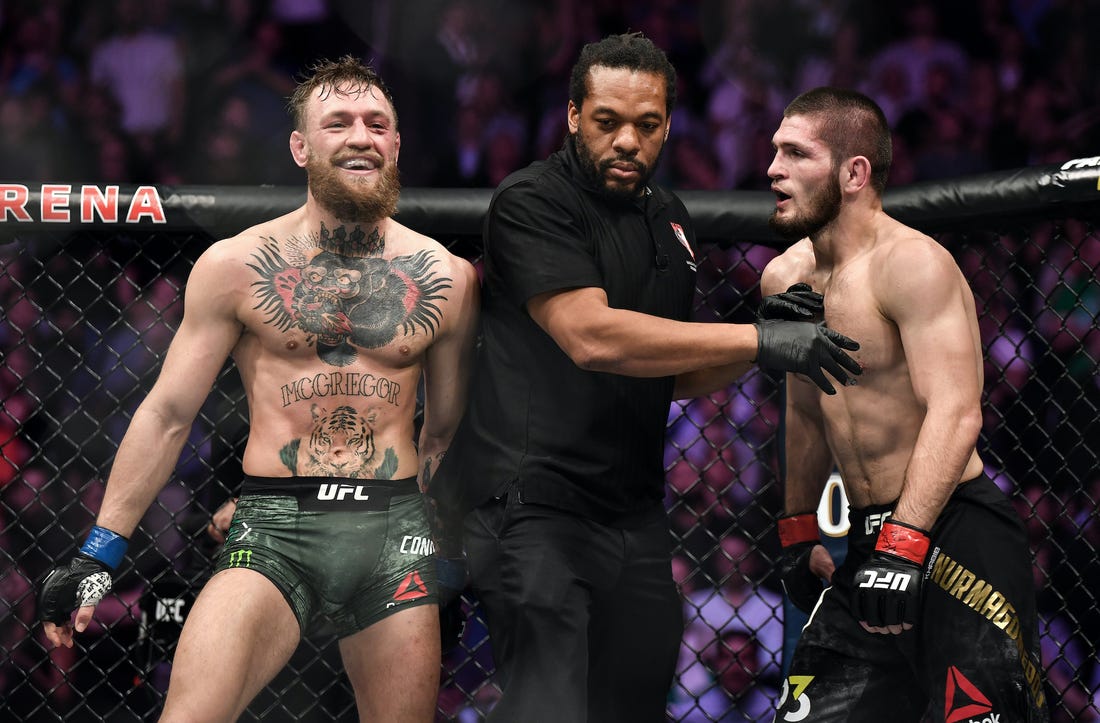 In a dark and sensitive build-up to the bad-blooded matching, Khabib and McGregor traded numerous barbs – with the former scoring ultimate bragging rights with a fourth-round neck crank finish of the returning Dubliner. After scoring the first retention of his lightweight throne, Khabib then scaled the Octagon fence and leapt toward McGregor cornerman, grappling standout, Dillon Danis – resulting in a scuffle.

In retaliation, member’s of Khabib’s corner entered the Octagon via the door and over the fence, throwing punches toward McGregor. Eventually separated by officials and security – both McGregor and Khabib were ushered backstage separately with the lightweight championship presented to the undefeated Dagestani afterwards.

Slapped with a nine-month suspension compared to McGregor’s six-month sidelining – Khabib has since scored a lightweight title unification win over common-foe, Dustin Poirier at UFC 242 in September of last year. In January – McGregor snapped a fifteen-month hiatus dating back to that October loss to Khabib – competing at the welterweight limit with a forty-second knockout win over future Hall of Fame inductee, Donald ‘Cowboy’ Cerrone.

Both men have crossed radars again recently, with Khabib refuting claims he had accepted an offer to coach the next instalment of The Ultimate Fighter opposite, McGregor – claiming he’d reject a $5 billion offer from the promotion to pit him with the Dubliner again.

Taking to his official Instagram this afternoon, McGregor posted a brief video, reminiscing on the UFC 229 brawl – labelling the member’s of Khabib’s corner as “unlucky lads“.

While the above mentioned, Khabib prepares for his latest test opposite current interim best, Justin ‘The Highlight’ Gaethje in the main event of UFC 254 next weekend on ‘Fight Island’ – McGregor has been continuously linked with a rematch with the previously noted, Poirier following their UFC 178 featherweight matchup back in September 2014.

While the American Top Team mainstay, Poirier had maintained he’s yet to reach an official bout agreement from the promotion for a rematch, he’s recently made his way back to base camp in Coconut Creek, Florida. With the pairing tentatively targeted for January 23rd. next – McGregor has called for the re-run to take place in either November or December, ahead of a potential outing in the squared circle against world champion, Manny Pacquiao.

“That ship has Sailed” Serena Williams On Pregnancy Rumours