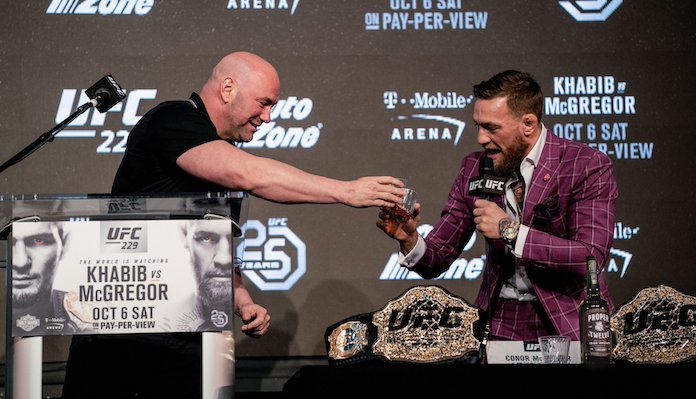 Dana White has a hunch as to why Conor McGregor released their DMs when he did.

On the day of UFC 253, McGregor released several DMs between him and White showing that he wanted to fight Justin Gaethje and Diego Sanchez. It took the MMA world by storm and for White, he says the Irishman did it to steal some thunder from Israel Adesanya.

“This was a weird one. This was weirder and different than anything he’s done before. There’s almost a pattern here,” White said to Sports Illustrated about Conor McGregor. “When we’re about to do a massive fight—and Israel Adesanya broke a ton of records last week in a global, massive fight—the day before that fight, he starts announcing he’s going to fight this guy and that guy. It’s almost like stealing Adesanya’s thunder. But he does it every time there’s a big fight.”

Conor McGregor and Dana White have been butting heads as of late. It even caused the Irishman to say he will be having an exhibition bout against Dustin Poirier with nothing to do with the UFC.

When that news came out, White said he would offer McGregor and Poirier the fight and that is exactly what he did.

“We offered Conor a fight. We made him an offer,” he said.

Conor McGregor has not fought since January at UFC 246 when he scored a knockout win over Donald Cerrone in 40 seconds. The fight marked his return to the sport after his submission loss to Khabib Nurmagomedov at UFC 229. The hope for the Irishman was to fight three times this year but right now, it seems unlikely he will even compete twice.

There is no question McGregor and White aren’t seeing eye-to-eye but for many fans, the hope is the Irishman will fight again soon.

Do you agree with Dana White on why Conor McGregor released their DMs when he did?