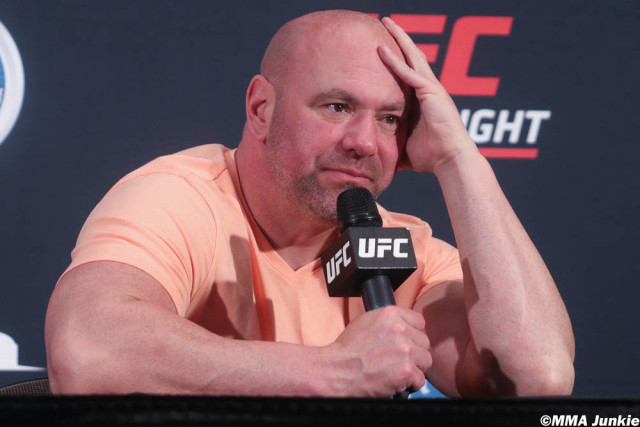 UFC president Dana White has revealed that Khabib Nurmagomedov vs. Justin Gaethje is likely to become the best-selling pay-per-view in company history.

The lightweight unification fights tops a stacked card in Abu Dhabi this coming weekend. Nurmagomedov is one of the biggest stars and most dominant champions in MMA. A fight against Gaethje has captured the imagination of fans, many of them believing ‘The Highlight’ has the ability to dethrone the undefeated Russian champion.

All of this has made for a monster event according to White who told TMZ Sports that UFC 254 is trending to be the biggest pay-per-view they have ever had, he said.

“This thing is trending off the charts for us right now. So, today is Tuesday and on Monday, this thing was trending to be the biggest fight we have ever had. Not Thursday, not Friday, Monday.”

UFC 229 which featured Conor McGregor vs. Khabib Nurmagomedov remains the biggest event in company history. Despite the fact UFC 254 is trending to be even bigger White is unsure if this weekend’s card will take top spot, largely due to the unusual American start time (2pm ET, 11am PT).

“It is trending bigger than that right now,” White said. “Will the trend hold? One of the things that is a big negative for us is that it is not in primetime at home and it is hard to message that to people.” (Transcribed by BJPENN.com)

Nurmagomedov has looked as close to perfect as humanly possible since joining the UFC back in 2012. The 32-year-old has won 11 straight fights, rarely dropping a round. He holds high-profile wins over the likes of Conor McGregor, Dustin Poirier, and Rafael Dos Anjos. Nurmagomedov will fight for the first time in more than a year in Abu Dhabi this coming weekend. It’ll also the first time he’s competing since his father and mentor Abdulmanap Nurmagomedov passed away.

Gaethje is currently riding high off the back of the biggest win of his career over Tony Ferguson at UFC 248. That win stretch his current streak to four. ‘The Highlight’ previously scored three consecutive first-round KO wins over James Vick, Donald ‘Cowboy’ Cerrone, and Edson Barboza to establish himself as one of the best and most dangerous 155lb fighters on the planet.