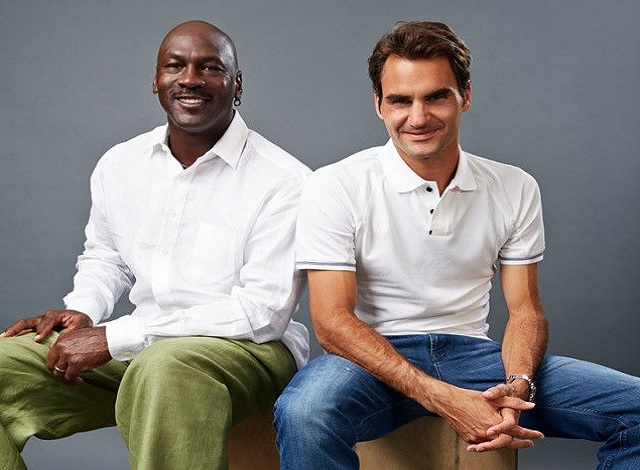 Roger Federer and Michael Jordan are two G.O.A.Ts of their respective sports. While Jordan’s average of 30.1 points per match is the highest for any basketball player till now, no male player has been able to break Federer’s undisputed reign of 237 weeks as the World No.1 player.

Interestingly, Federer met his idol, Michael Jordon for the very first time through the sports company, Nike. The two great players got together to help the company design a new Federer shoe inspired by a classic 1988 Air Jordan model.

It was soon after this that the both of them had dinner together. The Swiss Maestro even posted a picture with Jordon on his Instagram handle and stunningly, that was his first ever post on Instagram.

“It was an honor meeting one of my childhood idols today MJ,” wrote Federer in the caption of his post.

After their launch, Federer wore the Nike sneakers while playing a professional tennis match on the court. They were white and grey in color. From that point, they became really good buddies.

When Michael Jordan came to the US Open to extend his support to Federer
In the very same year when the commercial got released, Jordan even came to the US Open and sat in the Swiss’ courtside box. It was the first round of the Grand Slam and Federer managed to seal a straight set win over Marinko Matosevic.

Interestingly, the NBA legend cheered for almost every point that Federer won. The two also met personally after the former World No.1 won the match and shared a nice moment.

In an interview right after then match, Jordan admitted that he knows nothing about tennis but has only shown his presence to support Federer.

“I know nothing about tennis. He’s a good athlete. I know he played basketball a bit,” said Jordan in an interview after the match. As a result, since then, both the legends share a great bond with each other. Will they get together yet again for another commercial in the future?

Reasons Behind The Malice Between Roger Federer And Tiger Woods