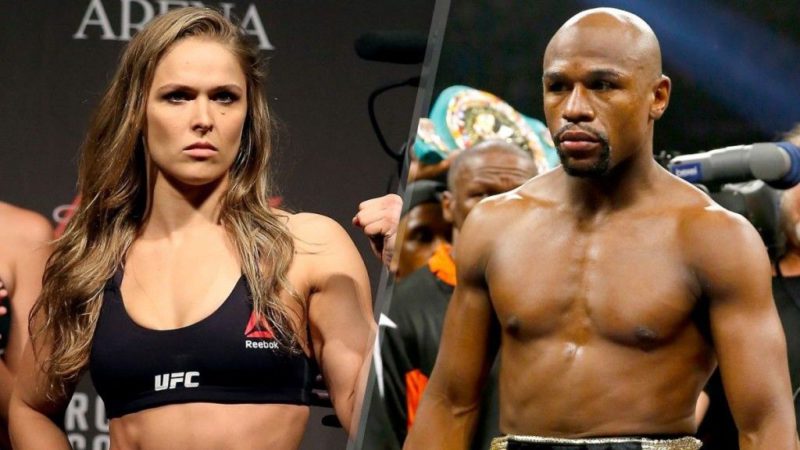 UFC veteran Ronda Rousey and boxing prodigy Floyd Mayweather almost bagged a matchup against each other, back in the day. When Rousey was relishing her dominance in UFC, a lot of people including Dana White and Manny Pacquiao dubbed her to be the favorite against Mayweather. While fight fans also voiced their approval over the matchup, it never actually materialized. Leaving inter-gender competitions a fantasy for the fans.

However, Rousey never hesitated to say that she would beat Mayweather in a no-rules fight.

When Ronda Rousey reacted on a possible matchup against Floyd Mayweather

Pacquiao, who has already faced a defeat against Mayweather, argued in 2015 that Rousey can beat the undefeated boxer easily. He also billed Rousey to be a strong and fierce woman.

In the same year, Rousey participated in a Reddit session to answer her fans. As predicted she was asked to reflect her opinion over facing Floyd Mayweather. To which she replied, “Floyd is one of the best boxers of all time. He would definitely beat me in a boxing match. I, unfortunately, don’t get into ‘matches.’

“I fight for a living. In a no-rules fight, I believe I can beat anyone on this planet.”

Rousey hailed Floyd Mayweather as a boxer and stated that boxing is a sweet science, which she wants to improvise every day. However, if it’s a no-rules fight, ‘Rowdy’ seemingly would give herself an upper hand.

That said, Dana White also had his approval over the matchup in 2014. If materialized, it could have been one of the biggest fights of the combat sports history. However, it didn’t happen and doesn’t seem probable in the near future either. Both Rousey and Mayweather are retired from their respective sports. Thus, they might never fight again. But Dana White was clearly interested in the fight.

In 2014, White said, “In a boxing match, Floyd beats her all day long. In a street fight or in the octagon, she hurts him bad.” However, Mayweather is still a retired veteran, officially while Ronda Rousey has been off the game.