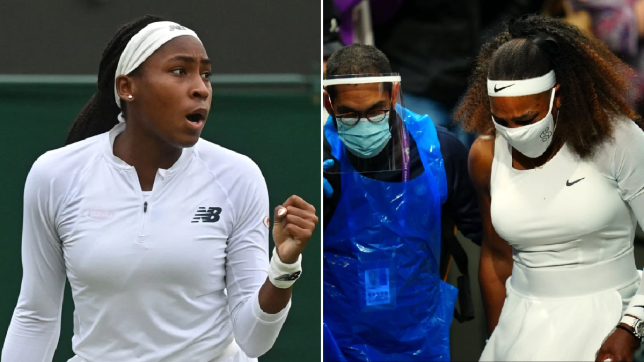 Coco Gauff says she could not bring herself to watch Serena Williams’ emotional first-round exit at Wimbledon after the 23-time Grand Slam winner was forced to retire through injury.

The American tennis superstar started her match against Aliaksandra Sasnovich well but rolled her ankle on the slippery Centre Court grass while serving, requiring a medical timeout before bravely trying to continue.

But her movement was severely limited and tears were welling up in her eyes, eventually slumping to her knees in the seventh game before telling the umpire she had to concede.

Gauff had sailed through her own first-round match against Francesca Jones shortly beforehand and was very sad to see her idol in such distress, wishing Serena a speedy recovery.

‘It was not easy to watch. Actually I turned away,’ said Gauff at her post-match interview.

‘I was in the gym actually stretching. I turned away because stuff like that makes me, like, really emotional.

‘I wish her the best. I wish that hopefully she can have a speedy recovery.

“Helped Me On The Court”: Naomi Osaka Reveals How She Settles Her Nerves During Matches