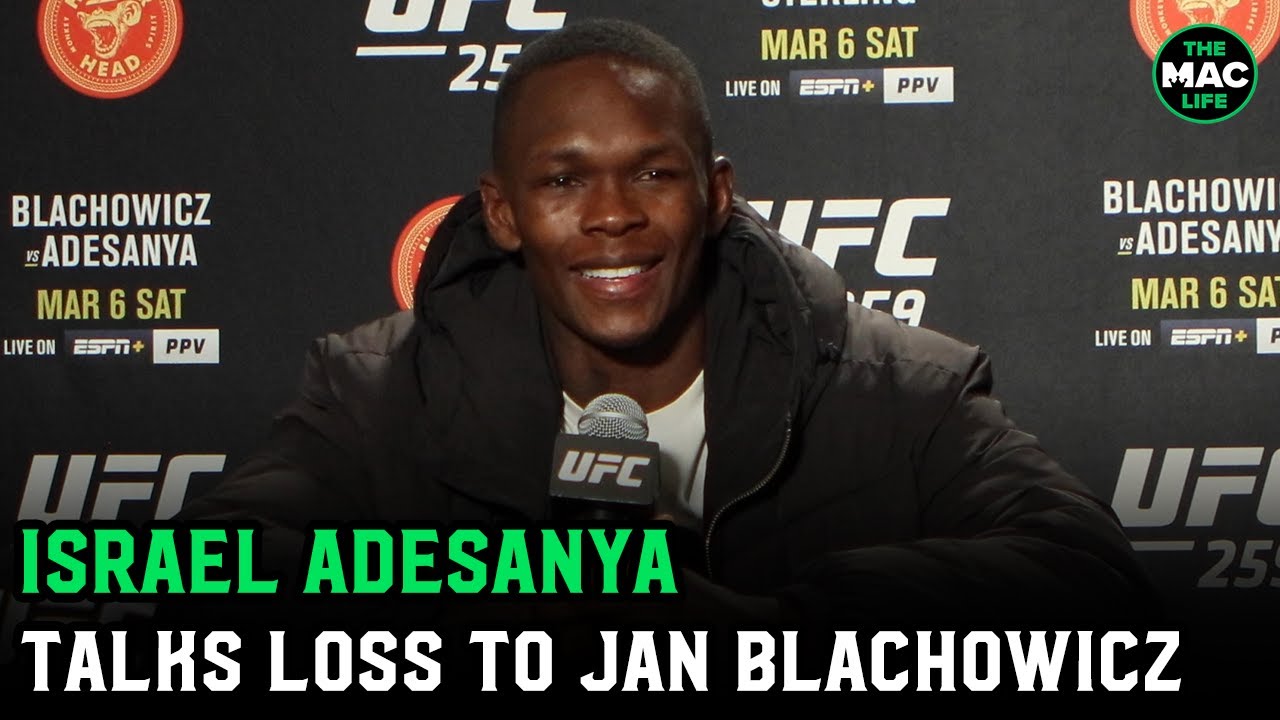 Israel Adesanya may have lost his first fight at UFC 259, but he’s not defeated.

Despite a valiant effort over five rounds, Adesanya’s attempt to become a two-division champion was thwarted by light heavyweight champion Jan Blachowicz in the main event on Saturday night.

While Adesanya definitely had his moments — and he won multiple rounds across the scorecards — he just couldn’t find a path to victory. Adesanya offered zero excuses afterward as he instead paid tribute to Blachowicz on a job well done.

“Losses are part of life, and losses are something I deal with occasionally,” Adesanya said at the UFC 259 post-fight press conference. “Just this is my first one in MMA, but as they say, it is what it is.

Adesanya may have given up some size to Blachowicz in the fight, but he still made a strong accounting for himself over five rounds while tagging the light heavyweight champion with some stiff shots on the feet. It appeared that Adesanya was getting the better of some of the striking exchanges, but his momentum stalled after Blachowicz took him to the ground in the fourth round and then repeated that again in the fifth round as well.

“It wasn’t until the last round, I credit him this, he timed [the takedown] well,” Adesanya said. “I’ll have to have a look at the tape and see where my mind was, but he just timed it well with that takedown. I had a good lockdown, I was trying to get the deep half, and I had the lockdown, but also he wouldn’t make space to punch. He did the whole pitter-patter thing cause he was just going to steal the round, cause he knew if he gave me space, I’m slipping. I was going to get back up. Credit to him, he’s a great champion.

“I lost the fight to the better fighter tonight. The craftier fighter tonight. But it wasn’t like an ass whooping or anything. When he had me on the ground, if he had postured up and then wailed on me and thrown some crazy elbows and crazy punches and connected crazy, yeah I can say give it a 10-8, give a 10-7 even. Use the whole 10-point must system, but there was none of that. He just held on and snuck some shots in to keep busy enough that the referee doesn’t stand it up and that’s a veteran move.”

A lot was made leading up to the fight about Adesanya’s decision not to add any real weight to his frame while preparing to compete in the light heavyweight division. At Friday’s weigh-ins, he tipped the scales at 200.5 pounds, almost five pounds under the maximum allowance for a 205-pound title fight.

According to Adesanya, size didn’t really matter much during the majority of the fight until Blachowicz landed the takedowns in the latter part of the five-round battle.

“His size didn’t really make that much of a factor until the last round when my legs just got fatigued,” Adesanya explained. “But my lungs were still fine.”

With a career record at 20-1 now, Adesanya isn’t wallowing in his shortcoming at UFC 259 but rather using the loss to Blachowicz as a lesson for his future.

“Honestly, I could have won this fight,” he said. “But tonight he played a better game plan and he was the better fighter tonight. That’s it. He respected me and I respected him. We had a great showing of ourselves. I’m not like heartbroken. I hate losing, don’t get me wrong but I’m not like ‘oh my god, f**k, he really embarrassed me.’ I felt like I had a great showing for myself. I represented my team very well.

“But now we go back to the drawing board and it’s kind of fun. This is the dip in my story. This is the failure if you will. Then I’ll rise up again like the phoenix that I am.”

Despite the outcome, Adesanya still had plenty of positives to take away from spending 25 minutes with the UFC light heavyweight champion and it’s only going to make him push that much harder to be better when he eventually returns to the division.

“No regrets,” Adesanya said. “Like I said, I feel like boxing or the boxing model has made it a bad thing to lose. Yeah it sucks losing, don’t get me wrong but it’s not like the end of the world. Like I said, I’ve lost before in the past. One of my friends—rest in peace—[said] I’ve lost many times but I remain undefeated.

“You’ll see me back at 205 [pounds] later in the future. Right now, I’ve got a division I’ve got to dominate. I know what they’re thinking ‘oh, that’s it, you’ve just got to take him down and then you’ve got him.’ All right, cool, bet, but I’ll remind them again why I’m the king of 185.”

In the end while he had nothing to feel sorry about when it came to his performance at UFC 259, Adesanya still felt compelled to issue a lone apology before his night was over.

“Everyone who supports me, all my people, I appreciate you. I’m sorry,” he said to close out the press conference. “I like to make my fans be proud when they say what I’m going to do, what I’ve already said being champ-champ or double champ, whatever. I’m sorry I let you down but if you want to get off the hype train, get the f**k off the hype train.

“We’re just stopping for a little gas. Understand? You can get the f**k off but if you want to stick with me, stick with me and trust me, I’ll show you a good time. It’s going to be a fun ride. I appreciate y’all.”