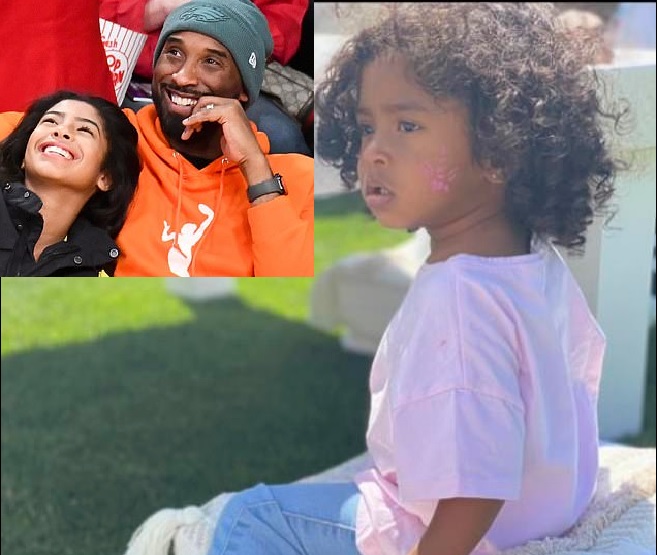 Vanessa Bryant took to Instagram on Tuesday with a shot of her one-year-old daughter Capri, saying that the toddler looks like her late dad Kobe and sister Gigi.

‘It’s the KOBE stare for me~Capri Kobe … Daddy and Gigi’s twin,’ Vanessa, 38, said on the social media site referencing Kobe, 41, and Gigi, 13, who tragically perished in a January 2020 helicopter crash.

In the shot, Gigi donned a pink top with blue jeans and had her curly locks down and parted with a design painted on her cheek.

The latest: Vanessa Bryant, 38, took to Instagram on Tuesday with a shot of her one-year-old daughter Capri, saying that the toddler looks like her late dad Kobe and sister Gigi

Vanessa, speaking last month with People, said of raising daughters Capri, Natalia, 18 and Bianka, four, in the wake of losing their beloved father and sister: ‘My girls are my reason.

‘Helping my girls navigate through this heartache is important to me,’ she said. ‘Making sure that they know that they are loved, supported and important is what motivates me.

Well-remembered: Kobe and Gigi were snapped at the 2019 Lakers game in LA

She said her four daughters are ‘strong, resilient, respectful and kind,’ adding, ‘They’re people that I would aspire to be if I was growing up with them.’

Vanessa said that during moments of struggle, she finds inspiration in her girls.

‘My eyes and pain can’t be filtered in person,’ Vanessa said. ‘They know mommy has hard days but when I see their faces when they realize that I’ve been crying, it makes me straighten up and push through for them. I counter it with making them smile about something … always finding the light in darkness.’

She continued: ‘I can’t say that I’m strong every day, I can’t say that there aren’t days when I feel like I can’t survive to the next,’ she told the publication. ‘My girls help me smile through the pain. They give me strength.’

Close couple: Kobe and Vanessa were seen in November of 2019 in LA, less than three months before his death in a helicopter crash

Vanessa Bryant Takes a Snow Trip With Her Daughters: “Wish Kob and Gigi Were With Us”