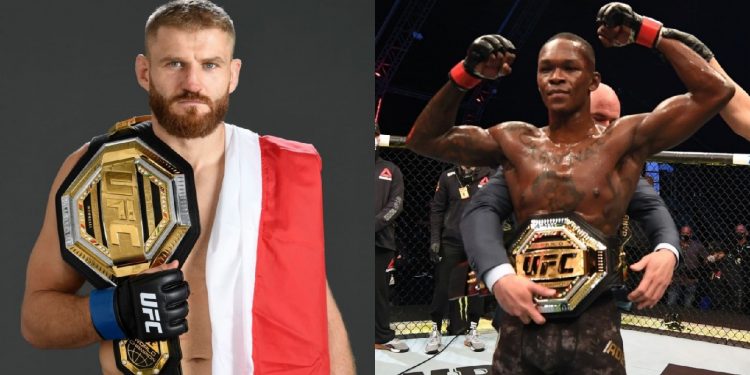 Middleweight champ Israel Adesanya recently made some comments that he was the best light heavyweight in the world. Newly crowned 205lb king, Jan Blachowicz has a thing or two to say about that.

Adesanya and Blachowicz both fought at UFC 253, each in their own championship bouts. While Izzy scored his second title defense against Paulo Costa, Jan became the first person not named Jon Jones or Daniel Cormier to hold the light heavyweight title in 9 years. It was a great night for both men, as they each finished their opponents with brutal striking.

WE GOT THIS!!!!!! 💪THE BELT IS GOING TO POLAND 🇵🇱 Thank you Abu Dhabi! 🇦🇪 #andNEW #LegendaryPolishPower #inAbuDhabi #UFC253

Following his win over Costa, Israel Adesanya, who had been previously discussing moving to light heavyweight to fight Jones, proclaimed himself to be the best light heavyweight, as well as the best middleweight in the world. As the 205lb champion, this clearly did not sit right with Jan Blachowicz. Speaking with Submission Radio, he addressed these comments from Adesanya, and whether or not he would fight the middleweight champ.

He can try, but he’s going back to his division really fast if he’s going do this, and when he meets me. It’s going to be the same like against (Luke) Rockhold,” Blachowicz said. “Everybody thinks they know me, you know? They think I’m an easy fighter. But when cage, when the Octagon door closes, they feel my power. I’m a completely different fighter. They never fight against someone like me. I think they have to feel it on their skin. This is the simple answer, they think they know me but they have never fought against someone like me.

“There is a UFC game on Playstation. So, if (Adesanya) chooses me in this game, then he’s gonna be the best in the 205 division,” Blachowicz continued. “But not in real life. No way.”