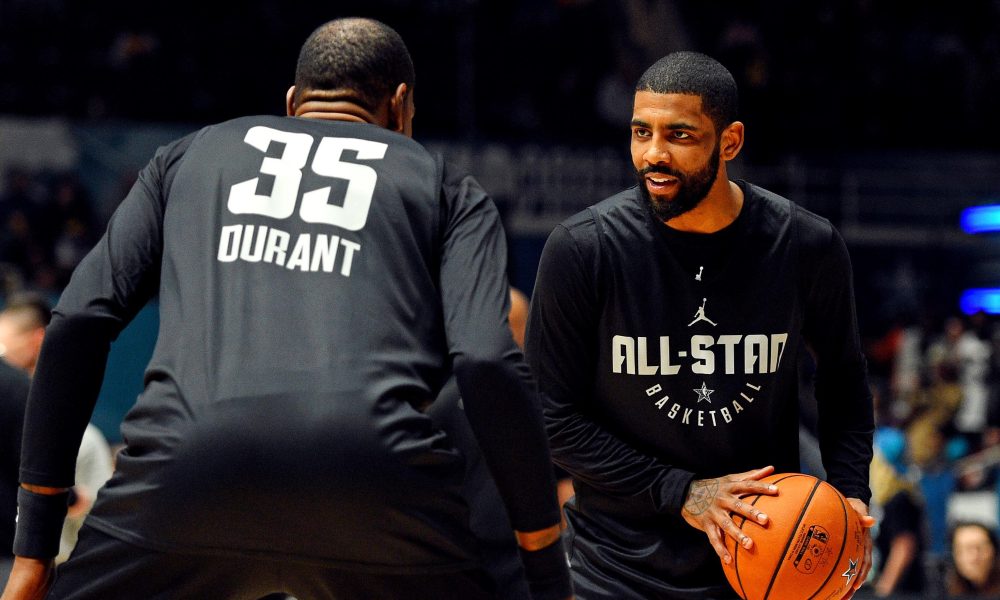 The entirety of the 2019 NBA season was about Kevin Durant leaving the Golden State Warriors and where he would go.

Rumor had it that he was going to go sweep Kyrie Irving up from the Boston Celtics and they were going to both play for the Knicks. This might’ve been the worst kept secret in NBA history.

Yes, Durant did end up pairing with Irving as everyone predicted. But they’re doing it in Brooklyn with the Nets instead of the Knicks.

Still, we all knew this moment was coming. We knew it as soon as we saw those two chatting it up in the tunnel at the 2019 All-Star game. They were always going to play together.

Kevin Durant admitted it on Tuesday on his new podcast “The ETCs” on The Boardroom.

At the 36:30 mark of the podcast, Irving is explaining how he and Durant both arrived in Brooklyn and how much of a surprise it was. And Durant interjects with this point.

“The All-Star game video where they caught us in the hallway. That’s when it was solidified that we were going somewhere. They didn’t know for a fact where it was, but it was somewhere.”

Here’s the video Durant is talking about.

“The All Star game video – where they caught us in the hallway. That’s when it was solidified that we were going somewhere. They didn’t know for a fact where it was. But it was somewhere.”

–@KDTrey5 on teaming up with Kyrie

Via The ETCs of @boardroom

Ironically enough, this is the very same video Kyrie Irving scolded the media about because of the speculation that surfaced around it.

Here’s what he had to say at the time, per Yahoo! Sports.

“It’s a video of me and one of my best friends talking. And then it turns out to be a dissection of a free-agency meeting? Do you get that? Like, do you get that? And then I’m asked questions about that? That’s what disconnects me from all that s***.”

Irving, you might remember, was agitated when asked about the All-Star video after returning to the Celtics.

Guess the media wasn’t so wrong after all. Way to play us, KD and Kyrie. Hilarious. Hopefully, next year, these two are both healthy and we get to see if they gel on the court as well as they do off of it.

“My level of greatness is sometimes crazy high, and I need to understand it,’ says Serena Williams