Kevin Durant said it makes total sense that an NBA player would risk punishment for sneaking a woman into his room at Walt Disney World Resort in Orlando, Florida, otherwise known as “the bubble.”

Durant, who’s Brooklyn Nets didn’t qualify to be in the bubble based on their regular-season record, appeared on “The Joe Budden Podcast” in an interview that was published on YouTube on Saturday, Sept. 19. 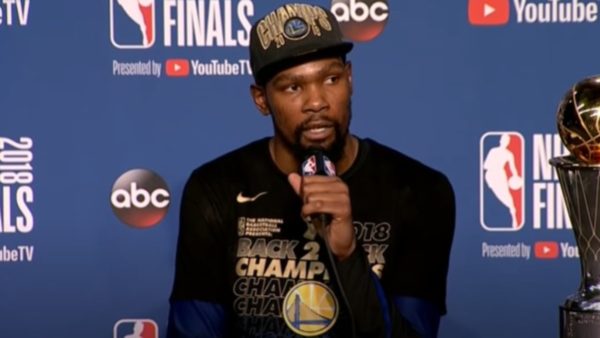 Kevin Durant says he understands why an NBA player would sneak a woman into his room while in the bubble’.

During the discussion, Durant and Budden talked about Houston Rockets player Danuel House Jr. being sent home from the bubble for bringing a female COVID-19 testing official into his room at the Grand Floridian Hotel.

“You’ve been in a bubble away from some action for three months? I mean, you can’t blame him, dog,” said Durant at the 13:09 mark. “And I heard it was no females at all outside of [COVID testers]. The maids were all men, there was nothing but men around. After a couple months, you down 3-1? Nah.”

The Houston Rockets were facing the Los Angeles Lakers in the Western Conference Semifinals when House was sent home for games three and four. The Lakers eventually won the series in five games.

At one point, House denied wrongdoing, despite being sent home and the woman said that she didn’t have any contact with him.

The Athletic reports that she entered the hotel in the early hours of Tuesday, Sept. 8, and made it past several security checkpoints before being questioned by NBA security.

The woman said she had contact with Rockets player Tyson Chandler and another Rockets player, but didn’t name House. House was implicated after the league investigated, and his entire team had to be quarantined.

But being sent home wasn’t House’s only problem, because his wife Whitney seemed to respond to the scandal.

“Reap what you sow,” she wrote on Friday, Sept. 11 on Instagram stories.