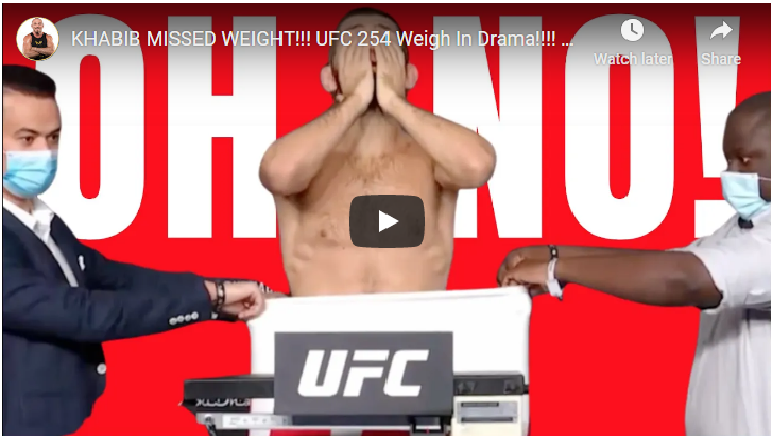 Ahead of tomorrow’s UFC lightweight championship unification clash, Khabib ‘The Eagle’ Nurmagomedov has been accused of tipping the lightweight scales beyond championship weight by veteran nutritionist and weight cutting expert, Mike Dolce.

Khabib, who was first to the scales this morning ahead of both opponent, Justin Gaethje, and potential backup, Michael Chandler who both successfully stepped in at 155-pounds, required the use of a towel before stepping on the scales.

The 32-year-old stripped down beyond his briefs, stepping onto the scales with officials either side, before the Dagestan native was announced at a championship weight of 155-pounds, mere seconds later. Appearing somewhat relieved, Khabib let out a sigh and covered his face before posing on the scales.

A relieved @TeamKhabib makes weight at 155 pounds for the #UFC254 main event. pic.twitter.com/3YvDpemL1s

In the above video, we can see the official briefly examine the grey bar which is shaking as Khabib steps foot onto the scale. Before the official slides back the counterweight on the right-hand side to its original position, the grey balance bar begins to float upwards, which would indicate the competitor on the scales is above the 155-pound limit set on this occasion. As we can see in the below video of interim champion, Gaethje who made weight this morning, the grey bar begins to rise and then returns to balance in the middle, with the official then resetting the counterweight.

Speaking after the weigh-ins, the above mentioned, Dolce commented on Khabib’s step to the scales, detailing how the official had made an error, and how the champion was not on “scratch weight“.

“Watch (Justin) Gaethje, watch the difference in how he weighs in, Gaethje,” Dolce said. “Watch the scale again, watch how it tips. It hits the top, comes back down, and [the official] pause and then wipes it. Look at how long it takes him to decide. Comes back down, stabilizes in the middle. He even pauses still and then he wipes it and calls it. Now watch Khabib (Nurmagomedov), here we go, up up up, wipes it on an upward trajectory. He’s heavy here!“

“Guys, this is incorrect. That is wrong. An error. Let’s call it a human error. Nonetheless, most likely in this moment, Khabib Nurmagomedov was not 155-pounds. He was not scratch weight. Now, would he have made weight? Sure. Let’s say he would. I’m a Khabib fan. I want this fight to happen and I don’t think Gaethje cares at all. But, at the same time, this was wrong. This was wrong, this was an error!“