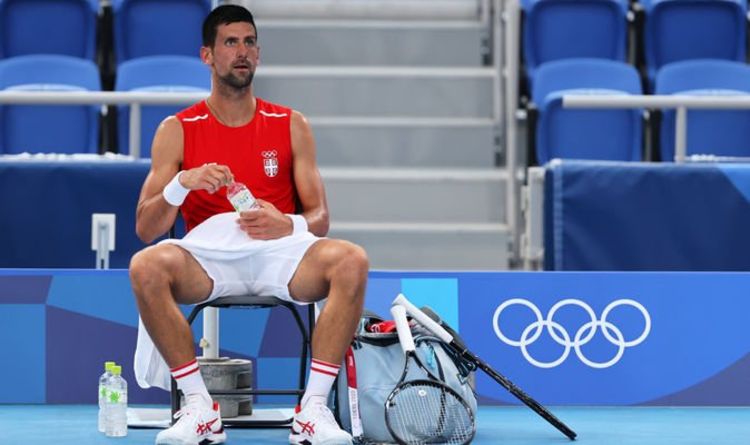 French Open and Wimbledon. Juan Martin Del Potro has told Djokovic this is his moment to secure a gold medal – the only achievement he has left to tick off in his astounding career. The draw for the tournament takes place tomorrow with the Serbian the overwhelming favourite.

Ahead of flying to Japan, Djokovic took to Instagram speaking of his pride of playing for his country.

“Honoured to play for my people and my country at the Olympics. Wheels up, see you in Tokyo,” Djokovic wrote. Former world number three Del Potro replied to the post: “I’ll be watching you! This time you have your chance amigo!” Djokovic’s best Olympics result came at the 2008 Beijing Games.

He defeated James Blake in the bronze medal match but will look for gold this time around. Federer will be absent as he looks to protect his body and lengthen his career as the 39-year-old looks for more success. “Winning a medal is my goal, and it is not a secret I am aiming for the gold.”

The tennis event at the Olympics has already been hit by a string of withdrawals by high profile names on both the men’s and women’s side, with Federer, Nadal, Serena Williams and Victoria Azarenka among the big names to have pulled out of the games.

Although the lack of top players coupled with no crowds able to attend in Tokyo have caused many to put an asterisk by the result of the event before it has even started, the 20-time Grand Slam champion isn’t worried about the extra factors.

“I’ve met Blanka Vlašić recently and she told me that in the future people won’t remember the conditions or whether there were people in the stands, but who has won medals,” Djokovic said.

Serena Williams: I Wanted to Have Children Who Are Close in Age