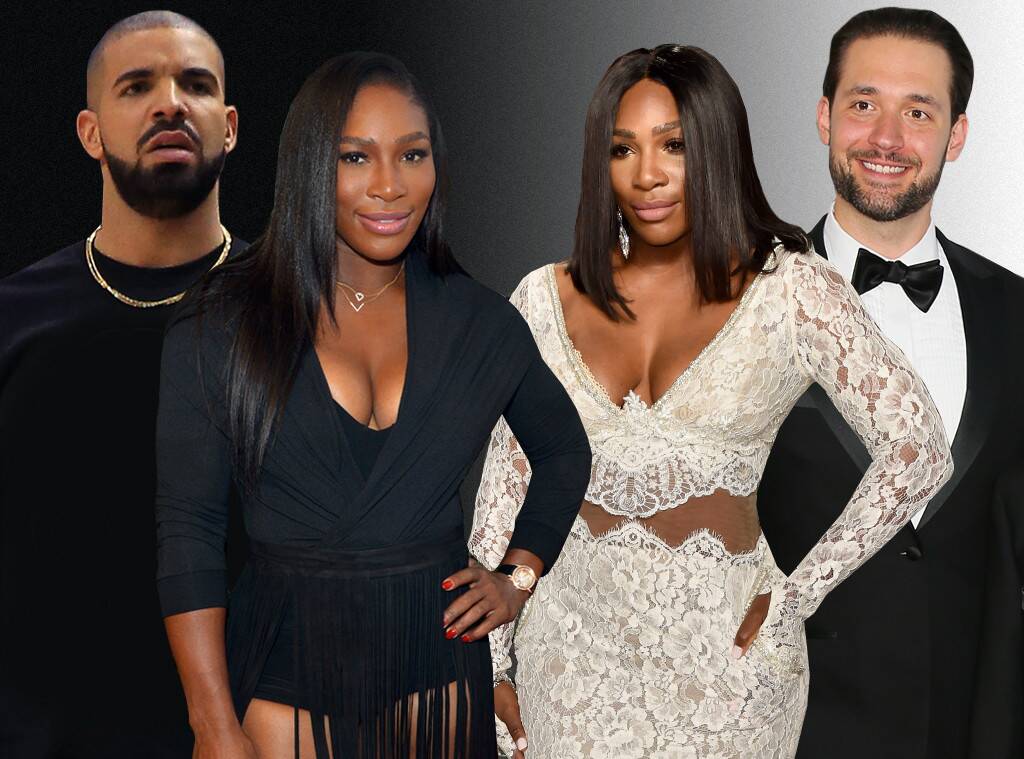 Congratulations are in order for Serena Williams, but for more than it seems.

First, the obvious. The tennis star, got married and has a kid with Alex Ohanian. We’ll pause here for the obligatory slow claps and champagne pops. Beyond the incredibly happy news, this milestone marks the culmination of a full romantic turnaround for Williams. It was a while back that she was embroiled in the tabloid drama that comes with associating with none other than Drake. Yet, in barely more than a year, she started a journey to complete happiness that is (almost) as impressive as her many Grand Slam wins.

Let’s start at the beginning. Drake and Williams were first outed as a rumored couple in August 2015, when they were photographed getting cozy in a Cincinnati restaurant. Drake had previously been spotting sitting courtside at one of her tennis matches, which stirred a bit of speculation, but it wasn’t until the prophetic paparazzi photos dropped that the rumors about the twosome really ramped up.

Drake and Williams had been friends for quite some time, and at the time of the Great Cincinnati Cuddle-Off E! News learned that they had been dating for about a month. The relationship was instant tabloid fodder and the Twitterverse, naturally, exploded. From that point on pretty much nothing that they did as a couple could be kept a secret.

According to E!’s sources, they initially tried to keep a low profile as they were both “private people when it came to their personal lives,” but it didn’t work out well at all. It was, for lack of a better term, a media circus for the ages.

They were photographed together everywhere they went, from his restaurant opening in Toronto to dates out on the town to front row at her New York Fashion Week show. Perhaps the most infamous example was the 2015 US Open semifinal match, an egregious case of the entire public totally missing the point. Drake was seated front row at the big match—as any supposed boyfriend would do—but the second that Drizzy was spotted in the house, attention immediately shifted to the rapper and his relationship with Williams.

The tennis star ended up losing that tournament in straight sets (that’s tennis speak for a very bad match), and fans immediately accused Drake of distracting her. The rumors and accusations went flying—as did the hashtags—in half-joking, half-serious manners, but it was all absurd nonetheless. So absurd, in fact, that over a year later Serena felt compelled to address it in a cover interview for Glamour.

Then, in almost as much of a surprise fashion as the Drake-Serena relationship began, the two were done. Over. Kaput. As anyone who’s had a Hollywood breakup will tell you, being constantly followed and critiqued in a relationship does not a sustainable coupling make. Sadly for Williams, it wasn’t the first time she had learned such a lesson. Her previous relationship with rapper Common had been splashed across the front pages of every glossy in the grocery aisle, and their ensuing dramatic breakup was even more widespread.

But there was almost no time to mourn for Serena, because she had met someone new. And this time it was a guy that she (and everyone else) could take seriously.

Since the tennis player and the Reddit co-founder got together, they have been operating in the exact opposite fashion from what we’d come to expect from one of the sports world’s biggest stars. They never made an official “we’re dating” announcement. They were (almost) never photographed together. In fact, the only reason anyone even knew they were together from the start is on account of their friend’s overly chatty tendencies.

Congrats on a great show @serenawilliams – so proud of you. Well on your way to dominating another industry. #NYFW #blurry

There were subtle hints of a relationship along the way, of course. As the couple became more and more serious, Ohanian started posting Instagram tributes to his new lady love. Williams was the subject of many a Woman Crush Wednesday, and he shared his pride for her many accomplishments, from winning tennis matches to showing her line at New York Fashion Week.

Then, last December, the couple announced their engagement—on Reddit, of course. (What else would we expect?) The proposal shocked the world, and the sentiment was far stronger than it was a little over a year previous, when news of the Cincinnati Kiss broke. It’s safe to say that a sizable population of the public never even realized that things were over for good with Drake—because if we know Drake’s approach to his love life, he likes to drag things out as long as possible.

But that just proves how different things were this time around. Serena and Alexis took things at their own pace and did things their way. Even the engagement announcement felt like a marked change from Serena’s past relationships, with the tennis star sharing a heartfelt (and funny) poem she wrote about the big moment.

The big news kicked off what is now going to be a banner year for Williams. Professionally, she already won a Grand Slam (this January’s Australian Open), beating her own sister Venus in the finals. Personally, she has admittedly never been happier. At the press conference for the tournament, which happened to be her first big public outing since the news of the engagement broke, she told reporters of the impending wedding, “It feels good.”

While she kept mum on any wedding plans—saying only that she was putting things off until the tennis season slowed down—and shied away from giving out any personal details about her new fiancé or their private relationship, she couldn’t help but gush about him a little bit.

“He is an incredibly nice person,” she said to reporters. “He really treats everyone the same, which is really cool to see.”

It might be hard for Serena’s fans to come to grips with a side of her that is markedly more guarded with personal news, but it’s a sign that things really feel right this time around. Williams is finding herself on solidly happy footing.

“They’ve never seen Serena this happy before with a man,” an insider told us of her friends. “It sounds cheesy, but it was love at first sight.”

It seems that after dating several very famous men, the tennis star has found her groove with someone of the more intellectual type. Sources have gushed to E! News that the  parents laugh non-stop and are on the same page in life.

And now that a child is in the picture, things have really come full circle. Now, back to those slow claps and champagne pops.