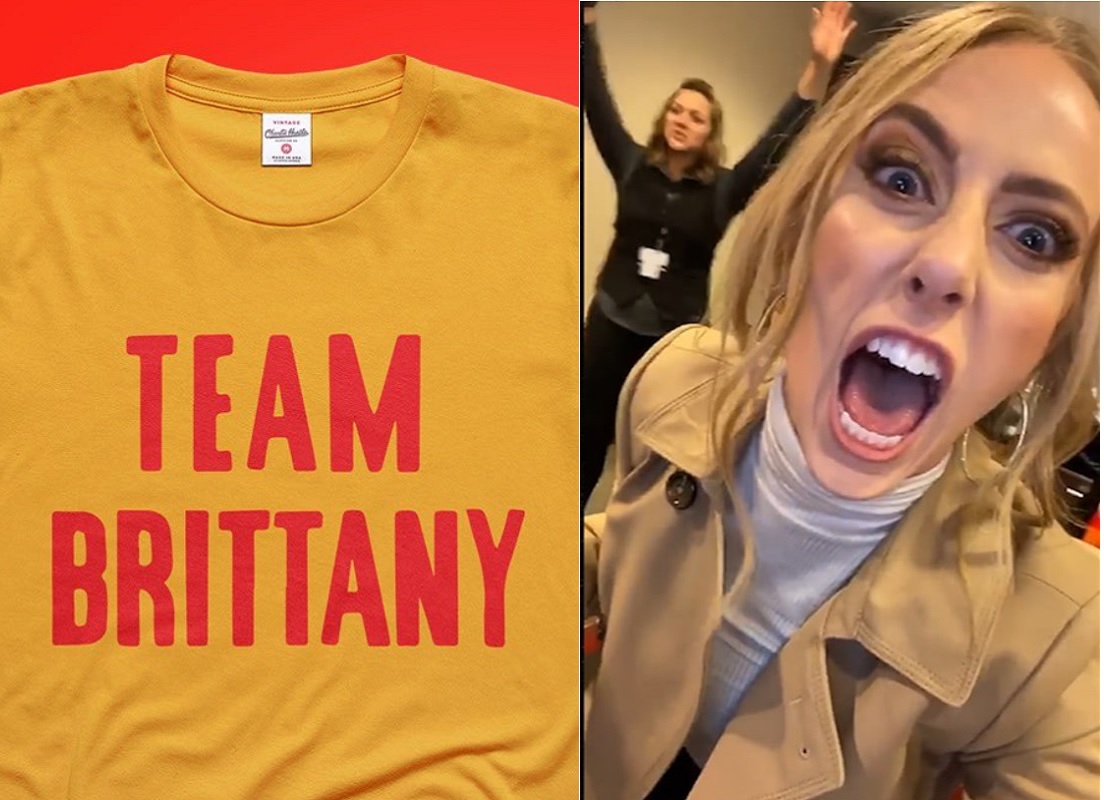 Brittany Matthews, the fiancée of Kansas City Chiefs quarterback Patrick Mahomes, is trying to take a creative approach at ending bullying. Remember, Brittany Matthews was ripped on social media for spraying bubbly on fans at Arrowhead Stadium after the Chiefs’ overtime thriller victory over the Bills last weekend.

Matthews teamed up with the clothing company Charlie Hustle to create the “Team Brittany” shirt, which features an orange-yellow background and the words scrawled across the front in red.

But seriously…leave Brittany alone. We’re teaming up with @brittanylynne8 & #RedCardKC, an organization founded in KC between @SportingKC & @ChildrensMercy in effort to call out bullying when you see it. Proceeds will benefit #RedCardKC! #TeamBrittany https://t.co/OmXFscJ2kw pic.twitter.com/ybS4oSvPm9

“First, I just want to say, I greatly, greatly, greatly appreciate Kansas City and how much ya’ll have gotten behind us and supported me so much. It means the absolute world to me.”

She said Charlie Hustle approached her to make the T-shirts and she wanted to turn the “opportunity into something good.” She said part of the proceeds from the shirt sales will go to Red Card KC, a local charity in Kansas City that aims to prevent any kind of bullying.

“We have decided that part of the proceeds from the sales of this shirt are gonna go to Red Card KC which is a local charity here in Kansas City that works to prevent bullying.”

The 26-year-old says she gets bullied all the time on the net … so it means a lot that she’s able to help.

“Obviously, I do receive a lot of hate on a daily basis on social media and I know so, so, so many other people do as well.
I’m lucky enough to have a good support system and a city that is lifting me up but I know there are a lot of people out there struggling with this so that’s why I’m proud to just partner with this company and get behind this cause and hopefully push everything into the right direction and start spreading some more positivity on all of these platforms.

I hope you guys just use this as a daily reminder to let you know that words are very powerful and it costs you nothing to be kind and nice to people… in this city we like to lift people up and not bring each other down.”

The future Mrs. Mahomes may get another shot at a post-game celebration this Sunday … if the Chiefs beat the Bengals in the AFC Championship.