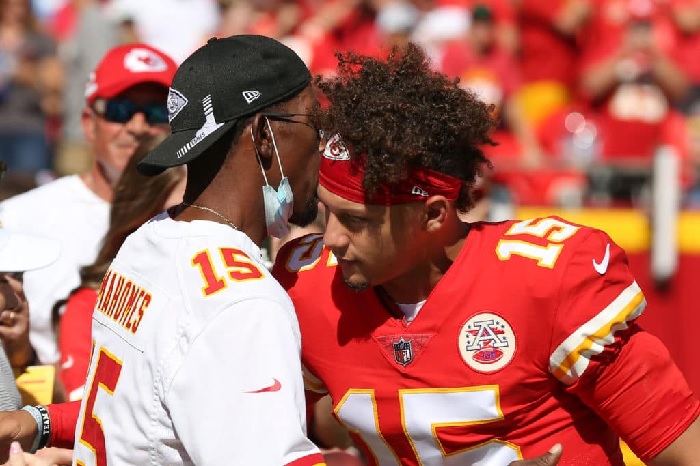 Moments after the confetti had fallen at the Hard Rock Stadium in Miami Gardens, Florida, the 25-year-old athlete searched in the crowd for his dad Pat Mahomes Sr., embracing the proud papa in an emotional hug.

Their happy moment was captured by the cameras and shown in a new clip from Showtime’s Inside the NFL series, posted to Twitter on Tuesday.

“Let me get my dad real quick,” said Patrick in the footage, as he made his way through celebratory crowds to find his father, who was all all decked out in Chiefs gear.

When the two finally came face to face, they immediately embraced. “We did it, baby; we did it,” Patrick gushed to his father. “I love you.”

“It’s amazing,” he added before parting ways, his proud dad sobbing at his son’s monumental sports achievement. Mahomes, who was also named MVP of Super Bowl LIV, led the Chiefs to a win over the San Fransisco 49ers with a score of 31-20 on Sunday night’s big game.

In a post-game interview with KCTV, Pat said his son’s win was both “crazy” and “gratifying.”

“For him to get there — and I know how bad he wanted to bring this city a championship and for him to be able to do it, and I know it’s something they haven’t had in 50 years so it’s gonna make it that much more special,” Pat said, “and I think it’ll make him that much more hungrier.”

Speaking with KSHB, Pat told the outlet that he plans to spend some time golfing with his son in the offseason, and that the victory was “very exciting.”

“For him to get a chance to play at the biggest stage and to come out successful and give Kansas City what they’ve wanted for a long time, it’s very pleasing,” he said.