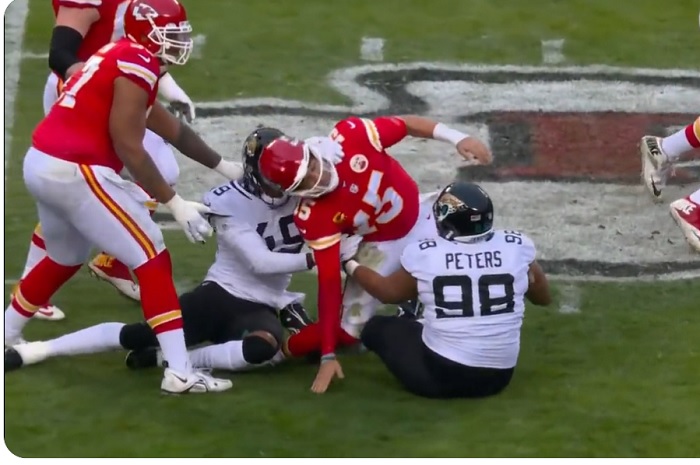 Patrick Mahomes suffered a right ankle injury at the conclusion of the first quarter of the Chiefs’ Divisional Round game against the Jaguars. As he was dragged down as he offloaded to Kelce, his ankle bent in an unnatural position beneath the weight of a Jags’ number 49 Arden Key.

Patrick Mahomes is limping around after his lower leg got fallen on pic.twitter.com/9GxwUuEpiZ

He initially played on, but was substituted by Chad Henne for the next Chiefs drive. The Chiefs officially listed him as Questionable to return, but the quarterback was back under center for the start of the second half.

After the injury, Mahomes stood up and hopped over to the bench for treatment during a 30-second break. He continued to play, albeit with a noticeable limp, until the conclusion of the first quarter, when he was strapped to the leg.

Patrick Mahomes is being checked out by the medical staff between quarters. #ChiefsKingdom #JAXvsKC on NBC and @peacock. pic.twitter.com/t0jbOr8SZk

Mahomes was observed telling the Chiefs staff that he “was good,” but on the Jags’ next drive, Mahomes left the field for more treatment in the locker room. According to NFL Network Insider Ian Rapoport, Mahomes underwent an x-ray, which revealed a high ankle sprain.

With Mahomes still in the locker room, Chad Henne took over at quarterback on the following drive. Henne led one drive, completing five of seven throws for 23 yards in a 98-yard drive that ended in the endzone.