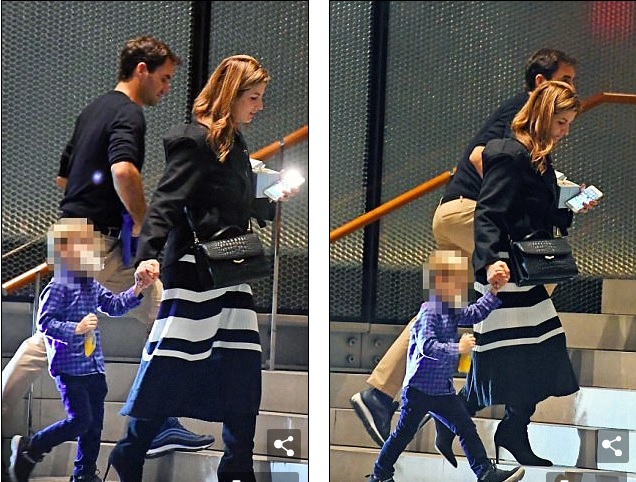 Roger Federer and his young family had a brush with royalty when they stopped by at Kensington Palace to visit their friends Duke and Duchess of Cambridge.

The Swiss tennis ace, who is in London this week for the ATP Finals, was joined by wife Mirka and their two sets of adorable twins on Wednesday night.

The family were spotted leaving their hotel on Wednesday afternoon before making the short drive to Kate and William’s home where they stayed for around two hours.

Brush with royalty: Roger and Mirka Federer, armed with gifts, are spotted leaving their hotel as they head to Kensington Palace for a date with the Cambridges on Wednesday night

The Cambridges have recently swapped Anmer Hall in Norfolk for Kensington Palace as their official residence as they prepare to take on more royal duties.

They are close friends of the Federers, who were guests at both Kate and younger sister Pippa’s weddings. And the pair came armed with presents for their royal pals, with Mirka carrying what appeared to be two small wrapped gift boxes.

Family fun: When the family returned to their hotel later that evening, Myla appeared to be carrying a drawing with her name scrawled on it (far right)

The couple, who wed in 2009, are parents to twin girls Myla Rose and Charlene Riva, eight, and Leo and Lennart, three. After leaving the palace later on in the evening, Myla appeared to be carrying a drawing with her name scrawled on it.

Mother-of-four Mirka, 39, was wearing a cosy black jacket over a blue and white striped dress, with her hair coiffed to perfection. The Federers were joined by Roger’s mother Lynette, 65, on Wednesday and after returning to their hotel the adults were seen heading out again for dinner.

The Federers were also joined by Roger’s mother Lynette, on Wednesday and after returning to their hotel the adults were seen heading out for dinner

The youngest set of twins are bound to get along famously with Prince George, who turned four earlier this year and has recently started primary school at Thomas’s Battersea.

Meanwhile Kate, 35, has only recently returned to royal duties after battling severe morning sickness during the first trimester her third pregnancy.

Loved up: Roger has said of his wife, ‘She knows it, I know it, everybody knows it. She’s a mum number one and a wife, and only then later does she become the supporter

The youngest prince or princess will be fifth in line of succession to the British throne after Princess Charlotte, two. The tennis-mad Duchess is a regular fixture in the Royal box at Wimbledon and is Patron of the Lawn Tennis Association.

‘No one will be prouder than me when I compete for Japan in the Olympics’, says Naomi Osaka