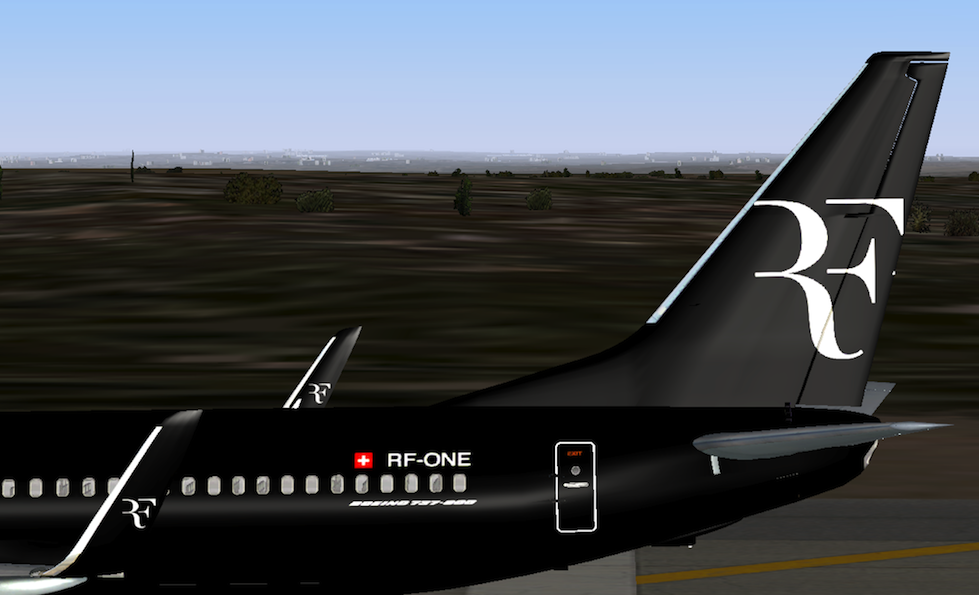 If Real Madrid FC can count on an airplane with Cristiano Ronaldo and others, for Roger Federer is practically the same… here is the first airplane ever with RF Brand.

Federer started his 2015 season at the Brisbane International.

He defeated Milos Raonic in the final, thereby becoming only the third man in the Open Era to have 1000 or more match wins, joining Jimmy Connors and Ivan Lendl.

He was also the first man in the Open Era to win at least one title each year, since turning pro.

In Dubai, Federer successfully defended his title with a straight sets victory over Novak Djokovic in the final, marking his seventh title in the tournament. After Wimbledon and Halle, it was the third tournament where he had won seven or more titles.

In addition, Federer also became the fourth person since 1991 to surpass 9,000 career aces. In March, he reached the final in Indian Wells but lost in three sets to the defending champion Djokovic.

Federer won his third title of the season at the inaugural Istanbul Open clay court tournament, ending a title drought on red clay since the 2009 French Open.

Federer then made it to the finals of the Italian Open in May, but was unable to win his first title there, losing to Djokovic. As the new expanded grass season began, Federer won a record eighth title at the Gerry Weber Open to become only the third man in the Open Era to win a title eight times.

He entered Wimbledon as the second seed. He played a flawless match to defeat Andy Murray in straight sets in the semi-finals and advanced to his 10th Wimbledon final in a repeat of the 2014 final, against Novak Djokovic.

Federer lost the match in four sets. He defeated Andy Murray and Novak Djokovic in straight sets to win the Cinicinnati Masters for the seventh time. This marked the first time that Federer had beaten the top-two players in the world in the same tournament.

At the US Open, he advanced to his first final since 2009 without dropping a set. His road to the final also included a win over Stan Wawrinka in the semi-finals. In the final, he was once again defeated by the top seed Djokovic in four sets.

At the Swiss Indoors tournament in Basel, Federer won his sixth singles title of the year, and his 88th ATP title, defeating his old rival Rafael Nadal. It was the seventh time that he’d captured his hometown tournament.

Alexis Ohanian: “I hated tennis before I met Serena Williams!”