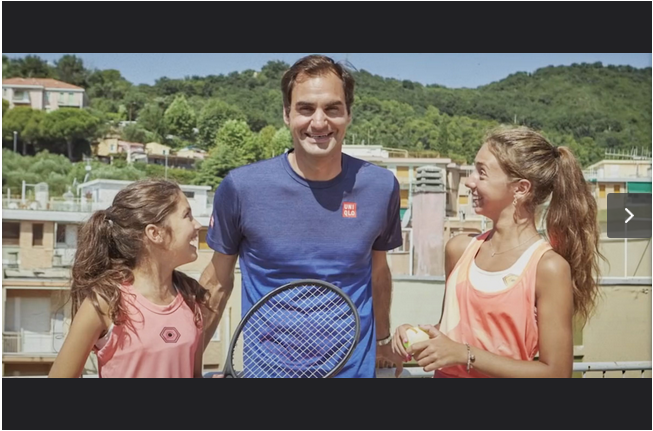 Roger Federer served up the surprise of a lifetime for two girls in Italy who went viral in April for playing rooftop tennis while they were quarantined.

The 38-year-old tennis champ from Switzerland teamed up with Barilla to play rooftop tennis with the girls named Carola, 11, and Vittoria, 13. The duo was answering questions on a rooftop for what they thought was an interview about their viral clip when they started talking about how much they love the tennis legend.

“If I were to meet him, I would jump on him, or I would be starstruck,” Vittoria said.

“I would like to have Federer’s elegance while playing,” Carola said.

While the girls, who went viral across a range of social media outlets, debated the merits of Federer and fellow tennis star Rafael Nadal, Carola realized Federer was right behind them.

He introduced himself and offered to play tennis with them.

They shouted down to one of their grandmothers and held up one of his rackets while trying to soak in the reality of playing in a match with their idol.

“Shall we have some fun? Ready to play? Yeah? Here we go,” Federer said before they started.

After working up a sweat and an appetite, he signed some tennis balls and asked if they’d like to have lunch. Federer, who’s won 20 Grand Slam singles titles, the most for any male tennis player in history, said playing with the girls ranks right up there with anything he’s done on a court.

“Personally, for me, that was a very special moment in my career as a tennis player to surprise a fan, or children, like I was able to with Carola and Vittoria today,” he said.
The trio then sat down for a meal.

“I have played in many cool places around the world, but this one is definitely up there for me as a special experience. We showed that we can play anywhere and have fun with it. So, I had the best time, honestly,” he said.

The video concluded with Federer appearing on the screen by himself to let the girls know he had found a summer camp for them and that he, along with Rafael Nadal Academy, would team up with Barilla, to send them there, proving once and for all that this tennis star truly is aces.

KUWTK: A Throw-back At Khloé Kardashian’s Relationship With James Harden