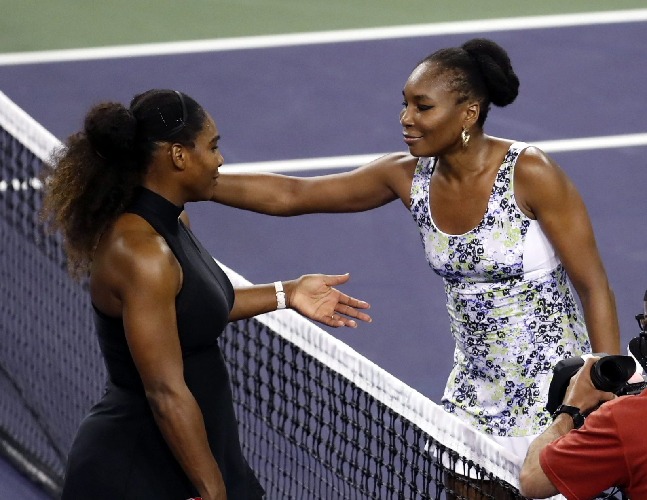 Serena Williams made a winning return to the WTA tour but needed three sets to get past Bernarda Pera at the Lexington Open to set up a meeting with her sister Venus.

The No 1 seed, who was last in competitive action at a Fed Cup qualifier in February, lost the first set in Kentucky. Williams needed to rally to win in her comeback following a six-month layoff, beating unseeded American Bernarda Pera in Tuesday’s first round of the Top Seed Open. Pera had two opportunities to earn a decisive break against the 23-time Grand Slam winner in the next set, but on both occasions Williams fought back and eventually levelled before she hit top gear to win 4-6 6-4 6-1.
The tournament’s top seed positioned herself to even the match by breaking Pera’s serve for a 3-1 lead in the second set before Pera answered with a break in the next game. The Croatian-born Pera eventually evened the set and had Williams down 0-40 at 4-4 before Williams, 38, rallied to stay on serve.

“I just knew I needed to be better,” Williams said. “I knew I could be better. And it was an interesting game. She had so many winners and [was] so low. I just had to kind of get used to a game a little bit. She played really well. “I wasn’t in a good rhythm and I just kept thinking Serena, play like you’ve been practising,” Williams said.

“I knew I could play a little bit better if I just hung in there.”

Venus Williams had a much easier time against Azarenka on a star-studded Tuesday. The seven-time Slam champ led 4-0 in the second set before splitting the final four games against the two-time winner to earn her first victory in four tries this year. A straight sets victory later in the day for Venus over Victoria Azarenka by a 6-3 6-3 score saw her book a meeting with her younger sister. Williams will face sister Venus in the second round and is using this tournament as preparation for the US Open, which begins on August 31.