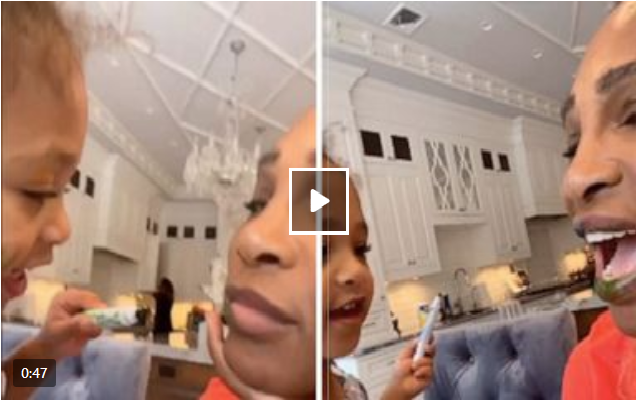 Serena Williams and her daughter Olympia had an adorable play date with makeup.

The tennis star posted a series of videos she titled “Serena Beauty starring Olympia Ohanian” on her Instagram stories Tuesday where Olympia attempts to glam up her face.

The 2-year-old sang, laugh and chatted while using colored markers on Williams’ eyes and lips.
Williams was a good sport as her daughter creatively colored away.

A few days before, the mom of one posted a video of herself wearing an orange star-printed top that belongs to Olympia.

“I knew me and my daughter would be wearing the same size,” Williams said during the short clip.

There also was another photo Williams told fans to swipe right to where Olympia can be seen wearing the top.

The love between Williams and her daughter was also evident in another post where Olympia helps her mother zip up a pink ensemble.

“She’s got my back already,” she wrote in a caption. “And I’ll always have hers.”

She’s got my back already. And I’ll always have hers.

Williams and Olympia’s matching pink dress moment has received more than 591,000 likes and loads of comments.

“We love a matching mama daughter moment,” one person commented on the post. It’s the love in the caption for us!” Several others shared similar sentiments.