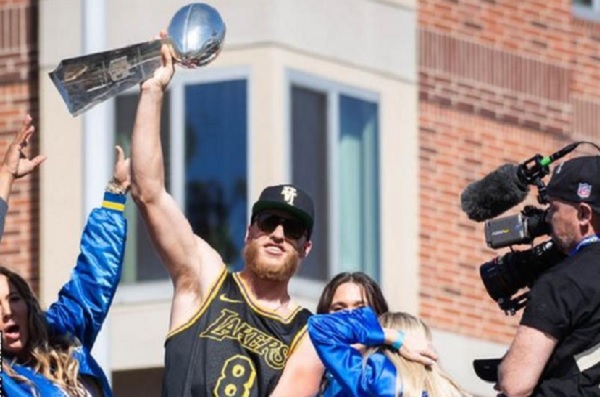 After scoring two touchdowns in Sunday’s win, Kupp was named the Super Bowl’s Most Valuable Player and wore a Lakers Bryant jersey during the Rams’ trophy parade on Wednesday.

“Kobe is a part of this,” said Kupp. “He belongs here, he set the standard.”

In the six years since returning to LA from St Louis, the Rams have built a star-studded roster and beat the Cincinnati Bengals 23-20 to claim the team’s second Super Bowl win.

Three-time Defensive Player of the Year Aaron Donald, 30, added: “We built a super team. If we can bring the super team back, why not run it back? We could be world champs again!”

Quarterback Matthew Stafford, 34, led the Rams to a Super Bowl victory in his first season with the team, helping Kupp to a breakout season.

The 28-year-old was the NFL’s Offensive Player of the Year and he, Stafford and Donald were all presented with keys to the city.

With the showpiece being staged at SoFi Stadium, the Rams also became the second team to win the NFL’s championship game in their own stadium, after Tampa Bay last year.

The game was also the first Super Bowl to be staged in the LA region since 1993, and the Rams were based in St Louis when they previously lifted the Lombardi trophy in 2000.