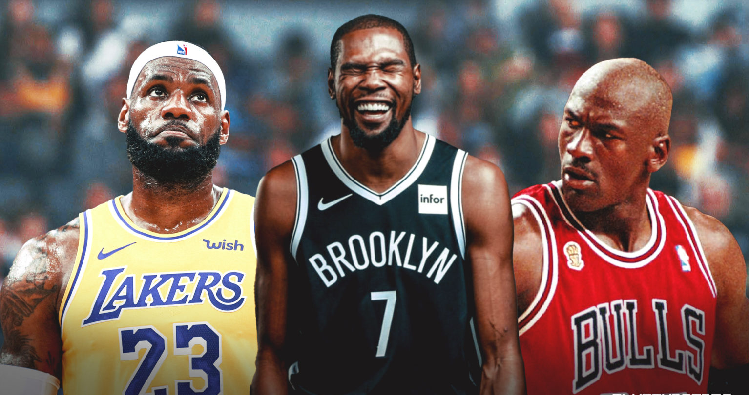 Brooklyn Nets small forward Kevin Durant was recently out shopping (with a mask on) and ran into a fan who said LeBron James, and not Michael Jordan, is the greatest NBA basketball player of all time.

Durant responded by saying, “That’s crazy.” The Nets superstar then said that he thinks Jordan is the GOAT:

The Michael Jordan-LeBron James debate feels like it is going to last forever at this point. Seemingly every other day this discussion pops up, and it’s getting really redundant.

While there are plenty of people who believe James is the best player in NBA history, Jordan is still universally ranked higher than LeBron, mostly because he went 6-0 in the NBA Finals. James, of course, is only 3-6 in the Finals and has gotten swept twice, once by the San Antonio Spurs and the other time against the Golden State Warriors.

However, we should mention that James is the only player ever to rank both in the top 10 in points and assists. His longevity is also something to marvel at considering he has been elite pretty much since the day he entered the league all the way back in 2003.

Durant, though, could go down as the greatest scorer in NBA history, even if he doesn’t pass Jordan, Kobe Bryant, James, Karl Malone or Kareem Abdul-Jabbar on the NBA’s all-time scoring list. We’ve never seen a player like Durant, a near-7-footer who can shoot from anywhere on the court and over anyone, not to mention he has guard-like skills.