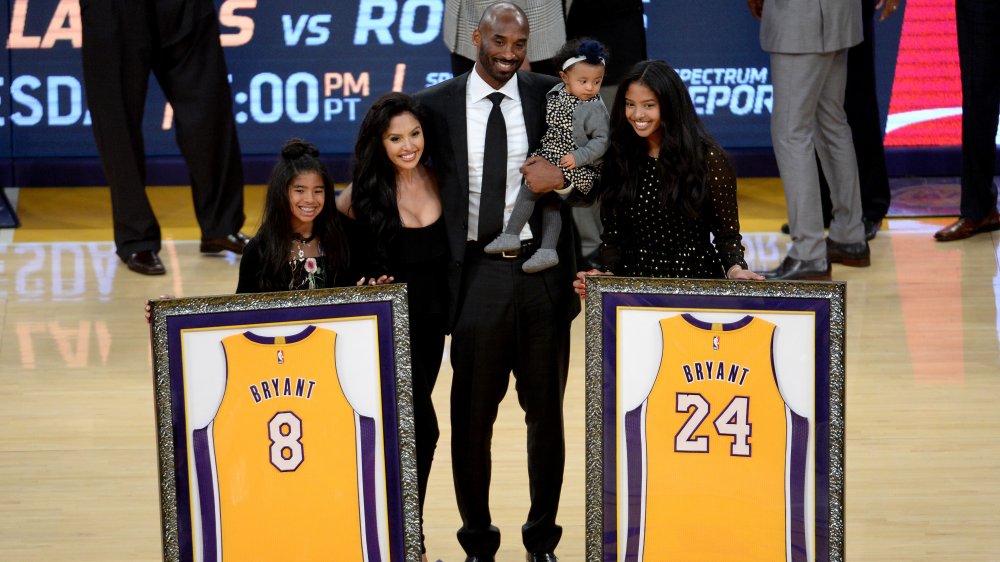 In the wake of Kobe Bryant’s tragic death on Jan. 26 2020, many fans and celebs have been paying homage to the basketball legend by memorializing him at the LA Lakers’ home at the STAPLES Center,

and by wearing and displaying his iconic Lakers jersey. Bryant had not just one, but two jersey numbers over the course of his career: No. 8 and No. 24. He is the only player in NBA history to have two numbers retired by the same team.

Bryant began his NBA career in 1996 while wearing No. 8. The number was a nod to his time growing up in Italy, where, as a kid, he wore number 8 on the court.

The number was also a reference to the number he wore at Adidas ABCD Camp, where he wore the number 143 (the digits add up to 8).

He continued to wear No. 8 for the first half of his NBA career. During that time, he rose to stardom with the Lakers, scoring 16,777 points over the course of 10 years.

Then, in the 2006-07 season, Bryant abruptly switched to No. 24, which he kept until he retired from the NBA in 2016. So what was the reason behind the unusual jersey number change?

Kobe Bryant told ESPN in 2017, a year after he’d retired from the NBA, that he’d never planned on switching numbers. But he ended up doing so because, in 2004, the Lakers changed direction by trading Shaquille O’Neal to the Heat. The team was morphing into something new, and Bryant opted to evolve along with it. Off the court, he’d also been accused of sexual assault the year prior. The criminal charges against Kobe Bryant were dropped, and he settled a civil lawsuit in 2004.

In an attempt to start fresh, Bryant began wearing a new number: No. 24. He said he intended to switch numbers right after 2004, but the deadline had passed, so he didn’t make the switch until the 2006-07 season.

“It’s kind of a clean slate,” he said. “I started new. Just start completely fresh, focus on the number that meant a lot to me.”

Bryant’s second jersey number, No. 24, was the number he wore early in his basketball career while playing at Lower Merion High School in Ardmore, Pennsylvania.

Kobe Bryant was always the same hardworking player regardless of which jersey he wore. He scored almost the same amount of points in each half of his career, and he won notable titles during each era. That’s why the NBA felt it necessary to retire both numbers.

However, Bryant did associate the two different numbers with different mentalities, and he saw the switch as a symbol of growth.

He added, “Then 24 is a growth from that. Physical attributes aren’t there the way they used to be, but the maturity level is greater. Marriage, kids. Start having a broader perspective being one of the older guys on the team now, as opposed to being the youngest. Things evolve.”

Kobe Bryant didn’t prefer one jersey over the other

Kobe Bryant also clarified to ESPN that he didn’t see one of his eras as superior. “It’s not to say one is better than the other or one’s a better way to be,” he said. “It’s just growth.”

When asked which version of himself he prefers, Kobe replied that his favorite season was 2012-13. “It’s the season where I ruptured my Achilles, actually,” he said. “Because I felt like I was playing the best basketball I’ve ever played in my entire career.”

He added that 24 was a “new book,” physically speaking. “Because when you get older, your muscles start getting sore,” he said. “Body starts aching. You show up to practice that day, you have to remind yourself, ‘OK, this day is the most important day.

I got to push through this soreness. My ankles are tight, they won’t get loose. I got to go through it, because this is the most important day.’ So, 24 also helped me from a motivational standpoint.”