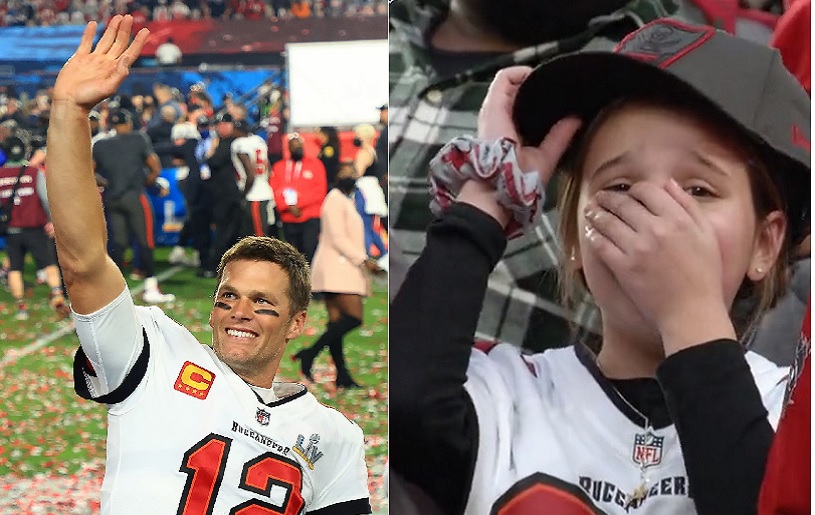 For a die-hard football fan, what is a bigger dream come true moment than getting a personal item directly from your favorite player? Recently, after the Panthers game, Tom Brady made the day of a special young fan.

While going towards the locker room after defeating the Panthers, we saw Brady walk to the stands. There was a little girl in an Andrew Adams shirt. What the legendary quarterback did next left the fan in tears.

Fans are what make a player. Without them, the entire sport of football will be missing its soul. They are the most important presence on the field. When a fan roars and chants, it fuels the team. The most special type of fans are young kids. These fans have been introduced to football by their families. They are the most innocent and purest supporter of the game.

Tom Brady loves all of his fans. He especially loves the enthusiastic young supporters. Brady makes sure that he gives back to his supporters at every chance he gets. This is exactly what he did after defeating the Carolina Panthers.

This was just for her ❤️ @espnw

After the game, the Buccaneers were headed back to their locker room. While going back, Tom Brady sees a cute young Bucs fan. Brady walked towards the little girl and handed her the snapback he was wearing.

Brady made sure no one got the cap but her. He moved it away from a boy trying to intercept this pass. This gift brought tears to the eyes of the little girl. She will cherish this cap and the memory for a lifetime.

Brady gave his cap to another brave young fan before

Back in October, the Buccaneers faced off against the Chicago Bears. The game was a dominant win for Tampa Bay. During the game, Tom Brady stopped mid-match to give a young fan his cap. He shook the kid’s hand and said hello to him. Later, we learned it was the same fan who held up the “Tom Brady helped me beat brain cancer” sign.

This brave little fan was suffering from brain cancer, but his hero helped him through the journey. These sweet little gestures by Tom Brady give these young fans memories they will remember forever. Brady is an outstanding football player, but with gestures like this, he is even a better man.