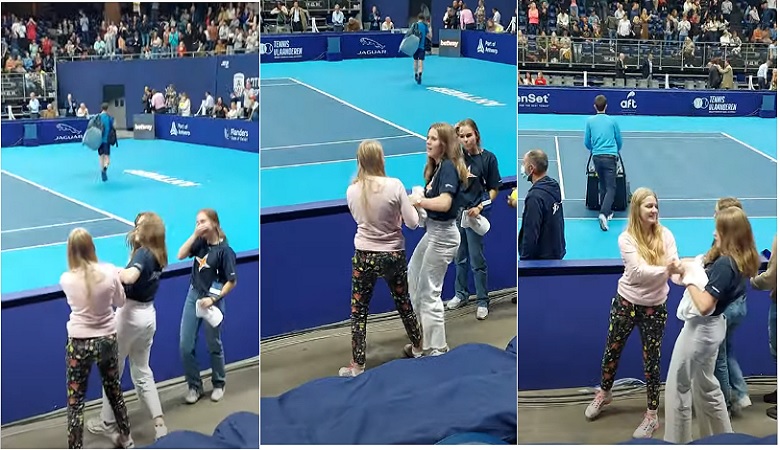 The 2021 season has been a comeback year for Andy Murray, even though he is still fighting to win big matches. More than anything, fans are enjoying his return and rallying behind him in every tournament. However, some take this fandom to a whole new level.

Recently, two girls fought over Murray’s towel as he walked out of the court in Antwerp, Belgium. Notably, the 34-year-old lost to second seed Diego Schwartzman 6-4, 7-6 in the European Open second round.

And as usual, he threw his towel in the crowd as a souvenir for fans. Indeed, none of the two girls who got their hands on it wanted to let go of Murray’s towel.

Previously, Andy Murray survived the lengthiest 3-set clash of the ATP 2021 season against Frances Tiafoe in the opening round in Antwerp. It took him three hours and 45 minutes to win that one.

This time, he came close in both the sets but couldn’t hold on for longer as Diego Schwartzman battled past him in straight sets.

But where one battle got over, another began. Funnily enough, two young girl tennis fans engaged in a harmless fight to win Murray’s towel.

See the video to find out who succeeded.Tennis-wise, the former World No.1 has lost only against top-ranked players on the Tour in the last month. However, such a win would boost his confidence further.

Ultimately, Murray’s campaign in the European Open 2021 ended, courtesy of the Argentine. Now, Schwartzman will take on 20-year-old American Brandon Nakashima to reach the Antwerp semifinals. Without a doubt, Schwartzman must be happy with this win over the three-time Grand Slam champion. It will now be interesting to see how far he can go in this tournament.