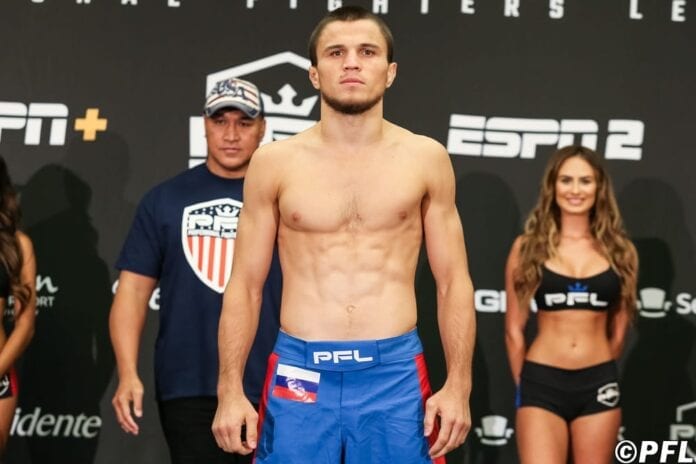 Umar Nurmagomedov has been ruled out of UFC 254 after the Russian Bantamweight was hospitalised with illness, less than one week from his UFC debut in Abu Dhabi.

Nurmagomedov is currently 12-0 in MMA and was set to make his UFC debut against former M-1 Global bantamweight champion Sergei Morozov, who was also awaiting his UFC debut. The bout was supposed to take place on the prelims of UFC 254, which is headlined by Umar’s cousin, Khabib Nurmagomedov who fights Justin Gaetjhe.

The news was initially reported by Russian news agency TASS that Nurmagomedov had been hospitalized with “severe flu, fever and vomiting,” the news was late confirmed by the UFC Lightweight Champion, Khabib Nurmagomedov on Instagram, Khabib said that his cousins symptoms were the result of a staph infection.

Posting to his 21.8 million followers on Instagram, Khabib wrote: “The last few days, Umar has been in a hotel with a high fever, which was caused by a staphylococcal infection. But despite this, he and our entire team were determined that he would perform on October 24th. This morning, before our flight to Abu Dhabi, he got worse and was hospitalized in Dubai. Get well brother, so it was meant to be.”

This is now the third time that Umar Nurmagomedov has missed out on his debut booking with the UFC. He was first booked to fight Hunter Azure at UFC 249 but similar to his cousin Khabib he was unable to make the fight due to Covid-19 restrictions. He was then supposed to fight Nathaniel Wood at UFC on ESPN 14 but pulled out of the fight after the death of his uncle and coach, Abdulmanap Nurmagomedov.

Khabib will now have to defend his Lightweight title on a card without his cousin. The Eagle will be hoping to go 29-0 when he takes on the Interim Lightweight Champion Justin Gaethje at UFC 254 on Yas Island, Abu Dhabi.

Do you think Umar Nurmagomedov will be a threat to the UFC’s bantamweight division when he makes debut?

Related Topics:Umar Nurmagomedov
Up Next