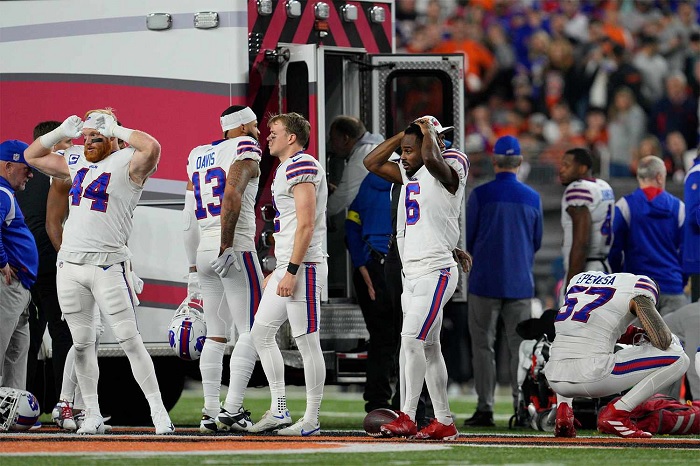 Following a heart attack during the first quarter of the Bills’ game against the Cincinnati Bengals, Damar Hamlin is still being treated in a Cincinnati hospital. The 24-year-old collided with Bengals wide receiver Tee Higgins and was struck in the chest.

After first standing up, Hamlin collapsed. Players from both teams gathered around Hamlin as he received CPR in the disturbing picture, and fans from all over the sports world showed their horror and support for the youngster only two years out of college.

After Hamlin was carried from the field by ambulance, the game was first briefly delayed and then permanently postponed. The NFL later confirmed that the Bills-Bengals game will not be rescheduled for this week, and there will be no changes to the Week 18 schedule.

The Bills confirmed Tuesday morning that Hamlin is still in serious condition at the University of Cincinnati Medical Center, despite having his heartbeat restored on the field.

A recent update by Hamlin’s uncle, describes the football player’s condition in the hospital room. He said his nephew is “flipped over on his stomach” in the hospital to help with the blood on his lungs.

Doctors say Hamlin is on his stomach to relieve pressure on his lungs, allowing them to work less hard, Glenn told CNN on Tuesday. The next stage is for Hamlin, who is currently sedated and on a ventilator, is to be able to breathe on his own.

Related Topics:Damar Hamlin
Up Next