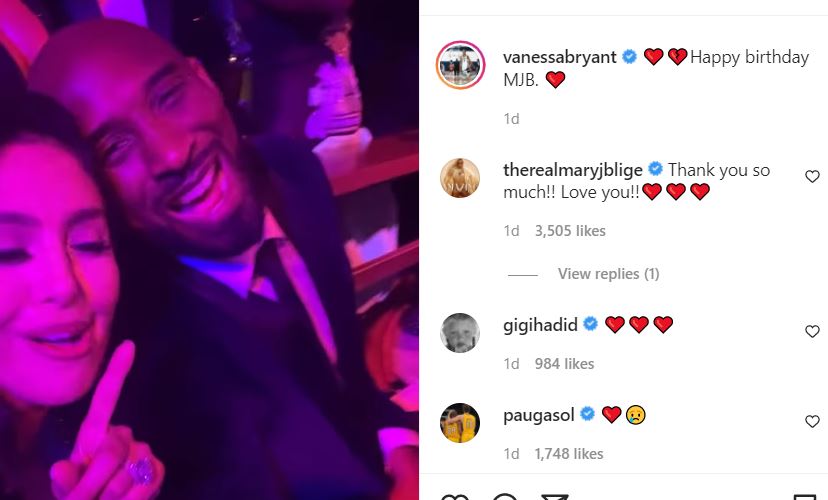 Vanessa Bryant is looking back on a sweet memory with her late husband, Kobe Bryant, ahead of the second anniversary of his death.

Vanessa, 39, posted a throwback video to Instagram Wednesday of herself and Kobe singing. In the clip, she and Kobe sing and jam along to Mary J. Blige, who is performing in the background.

She captioned the clip, “❤️💔Happy birthday MJB. ❤️,” marking Blige’s 51st birthday, which she celebrated Tuesday. On Jan. 26, 2020, Vanessa lost both her husband and her teenage daughter, Gianna.

Kobe and Gianna had been traveling by helicopter to a basketball game along with Sarah and Payton Chester, Christina Mauser, John Altobelli, his wife Keri Altobelli, and their daughter, Alyssa Altobelli when the helicopter crashed, killing everyone on the aircraft, including pilot Ara Zobayan.

Kobe was 41 and Gianna was 13 at the time of their deaths. Last year, to mark the first anniversary of the tragic crash, Vanessa posted a note to Instagram from one of Gianna’s friends.

“Today I received this sweet letter from one of Gianna’s best friends, Aubrey,” Vanessa captioned the post. “I love you Aubz (as my Gigi would call you). Thank you so much for beautifully sharing some of your memories of my Gigi with me and allowing me to share them here on my ig.”

She continued, “My Gigi is INCREDIBLE and I truly appreciate your thoughtful letter. She loves you so much. I miss my baby girl and Kob-Kob so much, too. ♥️I will never understand why/how this tragedy could’ve happened to such beautiful, kind and amazing human beings. It still doesn’t seem real. Kob, we did it right. Gigi, you still make mommy proud. I love you!”

She explained that she’s motivated by her daughters, who inspire her to keep going. Vanessa is also mom to daughters Natalia, 18, Bianka, 5, and Capri, 2, all of whom she shared with Kobe.

“This pain is unimaginable [but] you just have to get up and push forward,” she said. “Lying in bed crying isn’t going to change the fact that my family will never be the same again. But getting out of bed and pushing forward is going to make the day better for my girls and for me. So that’s what I do.”