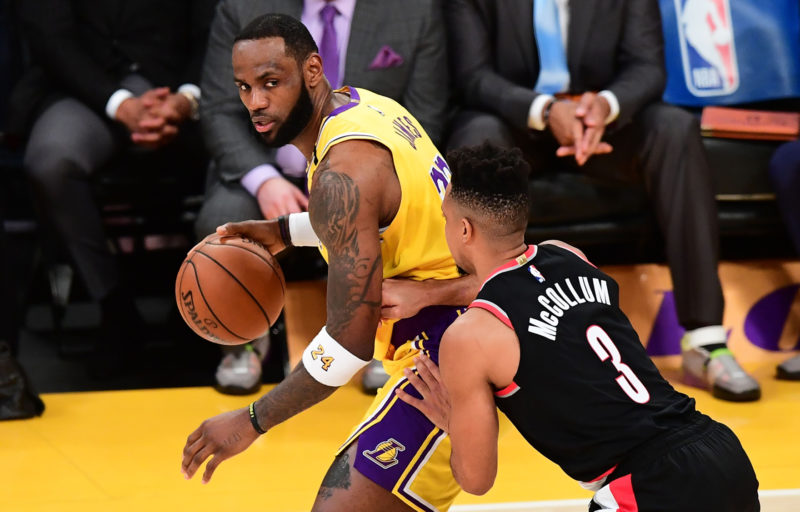 Just like the seeding games, the Los Angeles Lakers offence was even worse than the Portland Trail Blazers defence in Game 1 of the playoff series. All expectations from players like LeBron James and Anthony Davis went downhill after Damian Lillard‘s brilliant three’s. Lillard’s 34 points were enough to lead Blazers into a 100-93 victory.

This match was LeBron’s first appearance in the playoffs with the Lakers franchise, which should have been enough motivation to do better. His first campaign had led to the franchise finishing outside the playoff bracket.

LeBron James should step up

It is about time that the Lakers accept that the Blazers are no-ordinary eighth seed. LeBron James scored 23 points, pulled in 17 rebounds and dished out 16 assists. With this, he became the first player in NBA Playoff History to score at least 25 points, seize at least 15 rebounds and 15 assists. However, even creating records was not enough for them to win.

Skip Bayless was also stunned by the result of this game and wants LeBron James to be who he really is. On Undisputed, Skip said,” If you shoot 5-for-32 from 3 against the worst defensive team in the Bubble, you’re going to lose that basketball game.

“And with 7 minutes left, LeBron has the basketball in his hand with a 6-point lead. Close that deal, you are LeBron freakin James!”

This statement came after Lakers were leading with 6 points after LeBron’s three-pointer while there were 7 minutes to go. Following this, Blazers allowed them to only score once after and took the lead till the end of the game.

“If you shoot 5-for-32 from 3 against the worst defensive team in the Bubble, you’re going to lose that basketball game. And with 7 minutes left, LeBron has the basketball in his hand with a 6-point lead. Close that deal, you are LeBron freakin James!”@RealSkipBayless pic.twitter.com/1br42bxB63

Skip Bayless has a point. LeBron may be doing decent but he is not doing what is most expected of him, that is to score. He is doing a great job in the defense but requires a lot of help in the shooting aspect. The Purple and Gold need to work on their lineups now.

The lineup version that includes JaVale McGee, Kentavious Caldwell-Pope, Anthony Davis, Danny Green, and LeBron James is not working out. Frank Vogel can’t let the wrong players step on the court at a crucial time like this.

Related Topics:Lebron James
Up Next