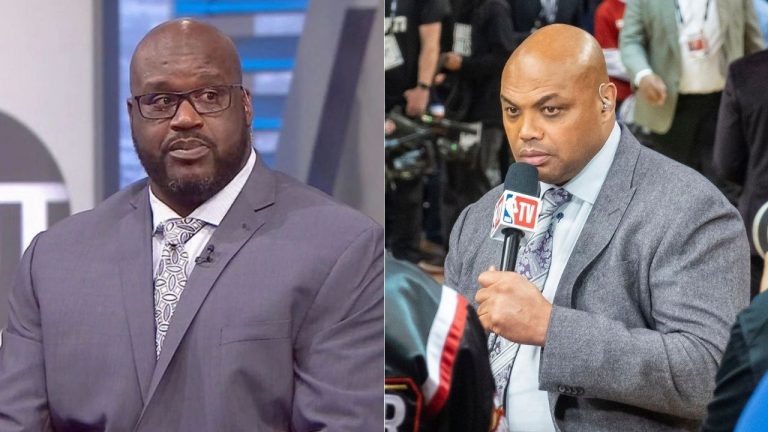 The partnership between Chuck and Shaq as the troublemakers on the TNT set has reached a new level of petty. Chuck said we would ‘never have heard of Shaq’ without Kobe or D-Wade.

Chuck never misses an opportunity to ridicule Shaq on Inside the NBA. Perhaps its because Shaq likes to flex his 4 championship rings so often. Or perhaps Chuck is just a jester trying not to take a buddy too seriously.

Either way, golden moments are generated on the set of the show when these two jaw at each other.

Chuck says ‘we wouldn’t have heard of you without Kobe or Wade’ to Shaq
During the segment, which also had Draymond Green on the set, Shaq explained why he thought team wins is a meaningless criteria for MVP voting.

Draymond reacted by saying he was happy to hear LeBron James be p***ed off with the MVP voting. The Jet Kenny Smith added on that the expectations from LeBron are for him to average 29, 12 and 12.

“If it wasn’t for Dwayne Wade and Kobe Bryant, we never would’ve heard of you.”

Barkley hijacked what appeared to be a healthy discussion by clowning on Shaq. Shaq, who was an All Star for each of his first 15 seasons in the league, was obviously much more than just a supporting big man.

But that obviously doesn’t shield him from getting roasted by an old friend on live TV.

Chuck immediately targeted Shaq and called him out for his rings being facilitated by Kobe Bryant and D-Wade.

The segment also included an interesting question for Draymond Green. Chuck asked Draymond whether his 2015 championship run was sweeter than his other two runs. Draymond responded in the affirmative.