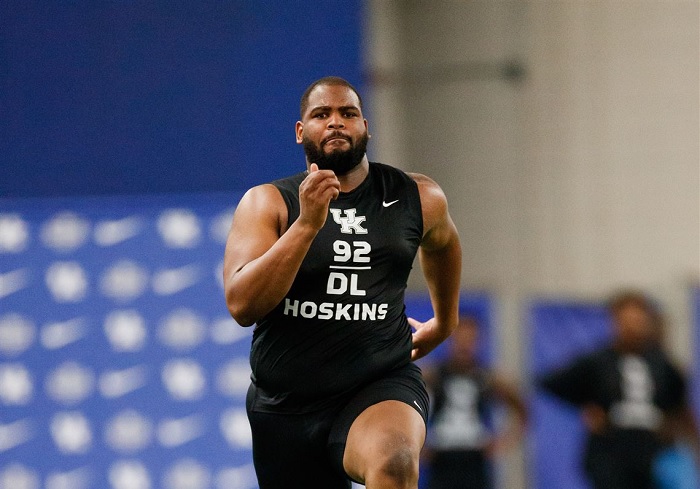 The Kansas City Chiefs signed former Carolina Panthers defensive lineman Phil Hoskins to the practice squad during their postseason bye week. The 6-foot-5 lineman himself made the announcement, tweeting a message to Chiefs Kingdom.

He wrote, “Lookin forward to this opportunity with the Chiefs, Let’s get it #ChiefsKingdom”. According to Chiefs Wire’s Charles Goldman and NFL writer Aaron Wilson, the matching cut in this trade was running back/returner Jerrion Ealy.

Lookin forward to this opportunity with the chiefs. Let’s get it #ChiefsKingdom

Hoskins was a Panthers seventh-round draft selection in 2021, although he was a bit of a young prospect with only one season as a starter at Kentucky. In 25 appearances, he had four sacks and 7.5 tackles for loss, as well as two forced turnovers.

Phil Hoskins has been referred to as “candidate for the bottom of the roster or the practice squad”. According to NFL Network draft expert Lance Zierlein, “Despite just a single season as a starter at Kentucky, Haskins is an interesting study as a prospect whose playing style doesn’t necessarily match his traits”.

“His 83 3/8-inch wingspan (34 3/8-inch arms) will get teams excited and he has good overall size to go with it. However, his playing style leans more to his snap quickness than his length, as he’s much more consistent at searching for gaps than controlling the action with his hands”.

“He’s nimble and very active in both the run game and as a rusher, and his spin-counter is a legitimate weapon in attacking the pocket. If he can get his hands and feet to work in skilled harmony, he might have life as a rotational 3-technique in a one-gapping front.”

Hoskins is the latest in general manager Brett Veach’s ongoing endeavor to acquire defensive tackle depth for the 2022 season. On the current KC practice squad, he’ll be joined by Danny Shelton and Daniel Wise.