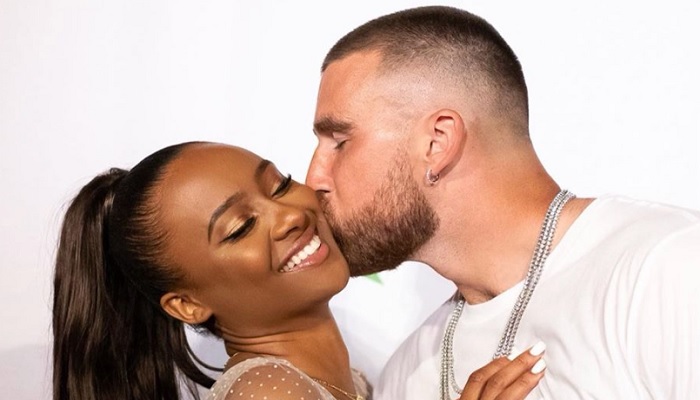 Kayla Nicole is telling about her longtime romance with Chiefs tight end Travis Kelce. The duo went their separate ways a few months ago.

Before the break-up, The Savage X Fenty ambassador took part in an Instagram “ask me anything,” revealing when — and how — she and Kelce first crossed paths.

“He had been following me and insta-flirting for a few months. All double taps and no dm. Soooo after a little liquid courage and a pep talk from @iqueenb (something along the lines of ‘WHAT ARE YOU WAITING FOR’) I dm’d him on New Years,” Kayla posted on her Instagram Story.

“Slid into that thang like it was third base, idk baseball so not sure that’s the best analogy, but ya,” she continued in a separate Instagram Story. “Anywho … lesson here is making the first move might be your best move sis.

Kayla, 30, and Kelce, 32, were first linked in 2017. Although they briefly split in the summer of 2020, they reunited later that year and have been together till about 4 months ago.

The couple had jetted to Hawaii for Patrick Mahomes and Brittany Matthews’ lavish nuptials in March, with Kayla serving as a bridesmaid and Kelce as a groomsman. When asked about the wedding by a fan on Instagram, Kayla called the affair “pure perfection.”

Prior to Matthews and Mahomes’ big day, Kelce flew to Las Vegas for his Chiefs teammate’s bachelor party, while Kayla joined the Kansas City Current co-owner in Miami for her bachelorette bash.

Much like Brittany, Kayla was always present at Chiefs games during the previous season. In January, she wrote a touching tribute to Kelce after Kansas City fell to Cincinnati in the AFC Championship.

“My homie, lover, friend – the respect and pride I have for you is endless. Love you, always,” Kayla wrote on Instagram at the time.