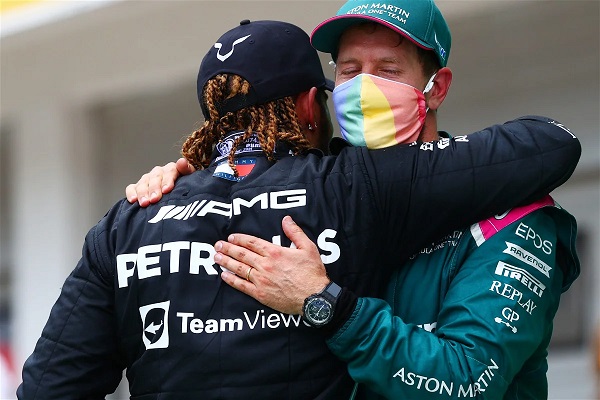 Lewis Hamilton is one of the few Formula 1 drivers in recent memory who match his caliber. The young man from Stevenage had the most amazing rookie season as he began his journey. He expanded on that with seven world championships and continues to be one of the grid’s most competitive drivers today.

Sebastian Vettel is the only driver in the contemporary era to have come close to Hamilton’s astounding total of seven championships won during his reign. Before he turned 27, the talented German won four world championship titles. Beginning in 2007,

it’s easy to assume that these two tremendously skilled drivers have ruled the era. In addition to their championship victories, there is a fascinating statistic that perfectly captures their domination. Hamilton and Vettel, the two-time world champions,

have been on the podium together an amazing 56 times. No other combination in the history of the sport has shared the podium as frequently as they have, making this a record. The two have raised the bar for consistency in the sport to an unheard-of degree.

We have all been fortunate to see the power struggle generate some spectacular races throughout this time. Sebastian Vettel, though, will say goodbye to the sport and call it a day after the current season. The two have always had a positive

friendship off the track despite their competition on the track. The two have consistently defended causes they support and have never been afraid to express their opinions. These qualities turned into a great deal of respect between the two, as shown by

Hamilton’s remarks in the wake of Vettel’s retirement announcement. Hamilton said, “I’ve not had a lot of time to think about all of the journey we’ve gone through together but when I talk about the journey I’ve experienced in this sport and often feeling that it’s been lonely,

I would say he’s one of the few people who have made it feel not lonely.” The heartfelt message from Hamilton gives a tiny glimpse into the incredible journey the two world champions have endured.