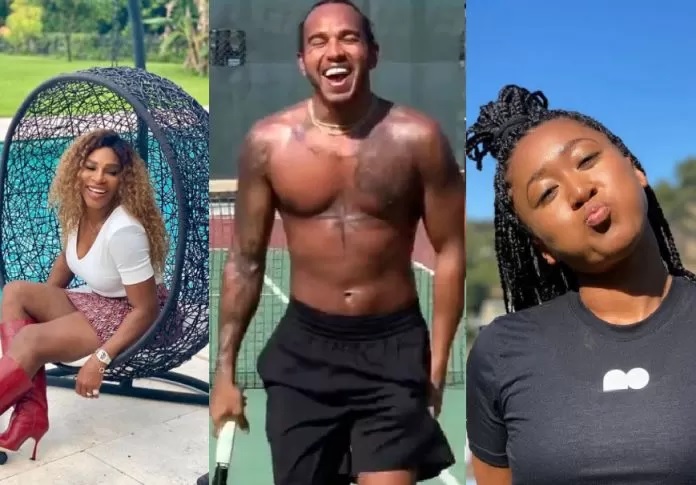 Naomi Osaka, Serena Williams and Lewis Hamilton are widely considered among the most prominent athletes that have been extremely vocal in defending the community of color. Naomi Osaka impressed with her activism on and off the court especially after the outrage sparked by the horrid killing of George Floyd.

Serena has been targeted for long by racist remarks and she is now engaged in helping women especially the ones coming from the black community. Lewis Hamilton is a great friend of Serena and he admired what Naomi did during the US Open when she wore 7 different masks during the event with the names of 7 victims of racism. Therefore, there is a strong bond between the 3 champions.

Naomi Osaka and Serena Williams reactions to Hamilton playing tennis
The F1 champion posted a rather entertaining video when he was playing tennis with his father. While Lewis is a “tiger” when competing in his sport, he looked extremely awkward when playing tennis.

“So my dad and I aren’t great at tennis but we are trying to get better. I always use a slice to beat him and he always falls for it. He’s now learned it and finally got me today,” he posted.

“When people ask me, how will you celebrate? We’ve got life to celebrate and spending time with family is how I am celebrating. #familyiseverything #dad @serenawilliams HELP!”

Eventually, he even admitted that he lost.

Of course, both Naomi and Serena couldn’t refrain from commenting. Naomi Said: “You gotta start training, you can’t let your dad kill you like that.”

Novak Djokovic admits: ‘Roger Federer is ultimate champion, regardless of his age’

Big 40! Moments That Define the Legacy of 40-Year-Old Roger Federer