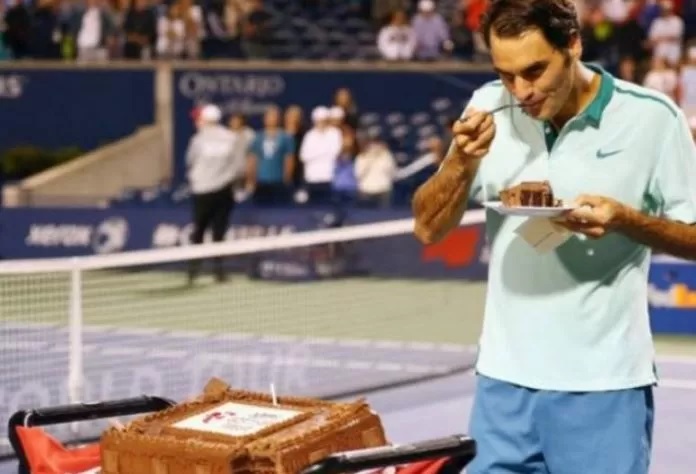 20-time Grand Slam champion Roger Federer turns 40 today. He is one of the greatest players of all time who has dominated the sport in the last two decades. Let us have a look at his top 40 moments of his professional career.

Fans sensed something extraordinary in the 20-year-old Roger Federer when he defeated his idol, Pete Sampras, at the Wimbledon Championships 2001. Even though he failed to win the Grand Slam, he impressed the hearts of each and every fan. It was the dawn of the era of the Swiss Maestro. After this, he never looked back and achieved many laurels in the sport.

Federer continued from where he left off and two years later, won his first-ever Grand Slam title at the Wimbledon Championships. He was just 22 at that moment and fans gave him a standing ovation.

3. Becomes World No.1 for the first time

After winning the Wimbledon title in 2003, there was no going back for the Swiss Maestro. He played really well at the Australian Open 2004 and as a result, won his second Grand Slam title in Melbourne.

It was after this victory that he became the World No.1 player for the very first time. Interestingly, he didn’t leave the spot for the next four years.

4. Early success and an astonishing record at Slams

The tennis seasons of 2005 and 2006 proved to be the best years in the career of Federer. In both years, Federer just lost two matches in the eight Grand Slams that he played. In contrast, he won 53 matches and five Grand Slam titles.

It is the time where one can say that Federer established his sheer dominance in the sport. Surprisingly, he lost both the matches to Rafael Nadal– first in the semis of the French Open 2005 and the second in the finals of the same event in 2006. Thus, it is also the time when the ‘Fedal’ began.

In 2007, Roger finally ended Nadal’s 81-match winning streak on red clay. The Spaniard was undefeated on the surface since 2005 but Federer not only defeated but bagged him in the final set of the finals of the Hamburg Open 2007.

“If I had to lose to anyone, Roger is the man,” said the 20-year-old, Nadal after his loss.

7. The triple ‘Triple’ for Roger Federer

In 2004, 2005, and 2007, Federer won the Australian Open, Wimbledon, and the US Open titles. He is still the only player to win all these three Grand Slam titles in a single year thrice till now.

After winning his first-ever Wimbledon title in 2003, Federer managed to defend his title for the next four years as well.

Federer won 65 matches on grass between 2003 to 2008. Intriguingly, he won all the five titles at the ATP Stuttgart Open, Queen’s Club Championships, and the Wimbledon Championships during these years.

Ultimately, it was his arch-rival, Rafael Nadal, who broke his streak by defeating him in the finals of the Wimbledon Championships 2008.

Federer accomplished the Olympic Gold at the 2008 Beijing Olympics along with his partner, Stan Wawrinka. The pair defeated the Bryan brothers in the semis and then went on to win the Gold for their nation.

Federer first won the US Open title in 2004. His hegemony in New York continued till 2008 after he successfully defended his title on four occasions.

It was the Argentine, Juan Martin del Potro who ended his streak at the Grand Slam by beating him in a five-set marathon in the finals of the US Open 2009.

Even though Federer hasn’t defeated Nadal at the French Open till now, he has a French Open title against his name. It was one of the biggest moments of his career when he defeated Robin Soderling in the finals of Roland Garros 2009 to clinch his maiden and only French Open title to date.

13. Ties the Knot with Mirka

Federer married his long-time girlfriend, Mirka, in 2009. He believes that she has had a great impact on his career and the two decided to tie the knot in the year Federer achieved his Career Slam.

Federer reached seven consecutive Wimbledon finals between 2003 to 2009. After winning the title in 2009, he achieved his 15th Grand Slam title- breaking Pete Sampras’ all time Grand Slam record of 14 titles in the men’s domain.

Federer achieved the Channel Slam in 2009 after winning the Wimbledon Championships and the French Open in 2009. However, Rafa achieved the feat before him in 2008.

From 2000-2009, Federer won a total of 15 Grand Slam titles. Interestingly, Novak Djokovic levelled his record of winning 15 majors in the following decade.

17. First Grand Slam as a father

Federer began the next decade on a high and he managed to win the Australian Open 2010. It was his 16th Grand Slam title and the first that he won in front of his two six-months daughters.

It was Djokovic who started playing some fantastic tennis in the beginning of the 2010 decade. He won the Australian Open and Wimbledon titles in 2011 and was a on a 43-match winning streak. However, it was Federer who put a halt to his streak after defeating him in the semis of the French Open 2011.

Roger Federer has won the ATP Finals title six times- which is the most by any player till now. Apart from this, he has reached the finals of the tournament on ten occasions which is a record in itself.

After not winning a single major in 2011, fans suspected that Federer was nearing his end. However, the Swiss Maestro bounced back and made an incredible comeback to win his seventh Wimbledon title in 2012.

Federer had the chance of sealing an Olympic Gold yet again at the 2012 London Olympics. However, Andy Murray battled past him in the finals and he had to satisfy with a silver medal in the singles category.

Team Switzerland was up against Team France in the finals of the Davis Cup 2014. It was Federer who defeated Richard Gasquet in the finals and seized the first-ever Davis Cup for his nation.

23. 105 points without an unforced error

This is quite a unique record in Federer’s career. Playing John Isner at the US Open 2007, he managed to claim 105 points without committing any unforced error.

24. The incredible comeback at Australian Open 2017

Federer didn’t win a single Grand Slam from 2013-2016. He was injured in 2016 and missed the entire season because of the same. However, he made a phenomenal comeback at the Australian Open 2017.

Fans thought that Federer’s career was perhaps over. But, he came back pretty strong in Melbourne and defeated Rafael Nadal in the finals to clinch his 18th Grand Slam title.

Federer gained his form after the Australian Open 2017 and then went on to win his eighth Wimbledon title in the same year. With this, he also surpassed Pete Sampras’ record of seven Wimbledon titles.

Interestingly, the 35-year-old Federer didn’t drop a single set throughout the tournament.

Federer yet again defended his Australian Open title in 2018 after defeating Marin Cilic in the finals. It was his 20th Grand Slam title and he became the first male player in the Open Era to accomplish the feat.

Since 1877, Federer is the only player who has defended 10 Grand Slams titles in his career.

Federer became the World No.1 after his win at the Australian Open 2004. He remained on the spot for 237 weeks after this and established a record that is yet to be broken.

Federer became the first living person to be featured on a Swiss coin in 2020. The Swiss government produced a commemorative 20 Franc silver coin in honor of the 20-time Grand Slam champion.

The coin features Federer in his backhand position. The government has planned to produce about 55,000 such coins.

After winning the Australian Open 2018, Federer became the World No.1 once again at the age of 36 years and 320 days. Thus, he is the oldest ever male player to get at the top position in the sport.

Before him, it was Andre Agassi who became the No.1 player at the age of 33.

Federer always dreamt of playing a tennis match in South Africa- from where his mother hails from. As a result, he organized a charity exhibition match, in Cape Town, South Africa, where he played doubles against Rafael Nadal. Surprisingly, the Swiss Maestro paired up with Microsoft owner, Bill Gates, in the match.

The match witnessed the highest-ever audience in a tennis match as 51,954 people saw the match live. About $3.5 million were donated to charity after the match.

After succeeding at the ATP Dubai 2019, Federer collected his 100th career title on the ATP Tour. He currently has 103 career titles in the singles category and is six behind Jimmy Connors’ record of 109 titles.

Federer survived a tough match against Gael Monfils in Madrid in 2019. At last, he emerged as the winner and that was his 1200th victory on the ATP Tour.

34. Becomes the first player to win at least 70 matches at all four Slams

After reaching the semis of the French Open 2019, Federer became the first player to record at least 70 wins at each and every Grand Slam.

However, he is not the only player to achieve that now as Novak Djokovic also has more than 70 triumphs at every Grand Slam.

Federer registered his 350th Grand Slam win at the Wimbledon Championships 2019. He currently has the most wins at Grand Slams.

Federer defeated Kei Nishikori in the quarters of the Wimbledon Championships 2019 which helped him achieve his century of wins at his favorite Grand Slam. As of now, he has 105 wins at Wimbledon which is the joint-most for any player at a particular Slam.

Federer achieved his ‘La Decima’ at the Halle Open in 2019. He has been the most successful player in the tournament’s history.

In August 2019, Federer became the only player to feature in the list of top 50 ATP players for 1000 consecutive weeks. He has on the list since June 2000 and is still the World No.9 player.

Federer won his 10th title at the Basel Open after defeating Alex De Minaur in 2019. Thus, he is the only player to win ten titles at a single tournament on two different surfaces.

Even though Roger didn’t play much tennis in 2020, he was the highest-paid athlete in the year. Intriguingly, he was ahead of football legends, Cristiano Ronaldo and Lionel Messi, and earned $100 million from endorsements alone. Even in 2021, Federer is the seventh highest-paid athlete and the only tennis player to feature in Forbes’ top 10 richest athletes.