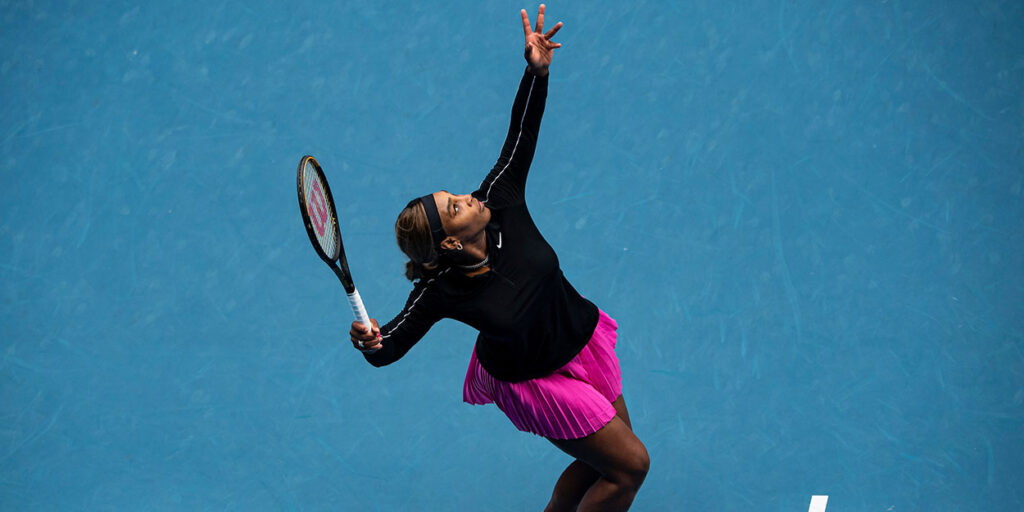 No woman in tennis history has served more effectively than Serena. She owns a delivery of exemplary efficiency, pruned to its essential mechanics, superbly disguised,

capable of dispatching aces and services winners, as well as eliciting many attackable returns. For more than 20 years,

this has been the one shot that consistently and emphatically separated Williams from all of her peers. But quite recently, the quality of women’s serves has improved drastically.

From the versatility of Ashleigh Barty, Bianca Andreescu and Karolina Muchova, to the power of Naomi Osaka, Iga Swiatek, Karolina Pliskova, Aryna Sabalenka, Madison Keys and Petra Kvitova, to

the lively kick of Jennifer Brady and the emerging skill of Coco Gauff, the deployment of the serve among WTA competitors has undergone a sea of change.

“Any time a player dominates with a certain stroke the way Serena has with the serve, everyone has to catch that,” says Mark Kovacs, a coach who has worked with many pros, including Keys, Sloane Stephens, Reilly Opelka, Frances Tiafoe, and John Isner.

The way Kovacs sees the serve, “Historically, the game plan was not to make a lot of mistakes, be consistent and let the groundstrokes and movement win matches.” As an example, check out the eight women who reached the quarterfinals in Miami ten years ago: Andrea Petkovic, Jelena Jankovic, Maria Sharapova, Alexandra Dulgheru, Agnieszka Radwanska, Vera Zvonareva, Victoria Azarenka, Kim Clijsters.

With the exception of occasional flashes from Sharapova, none of the other seven deployed the serve in a particularly aggressive way. Instead, each opted to fall back on the longstanding concept of the serve as a point starter – an assumption of neutrality that, when you consider the high quality of contemporary service returns, is potentially dangerous.

As Emma Doyle, a Tennis Australia High-Performance coach, asks, “When you see how short so many rallies are, wouldn’t you want to be in charge of your destiny right away?” Certainly that’s Serena’s philosophy in hitting what has long been considered the most important shot in tennis.

Kovacs and Doyle both believe the undistinguished serves of prior years were the result of many factors, starting with it not being taught too extensively amid the group lesson gestalt that often governs instruction. Of all the shots, none more than the serve requires extensive personal attention from an instructor.

Serena Williams’s Advice for Her Younger Self Is Sagely