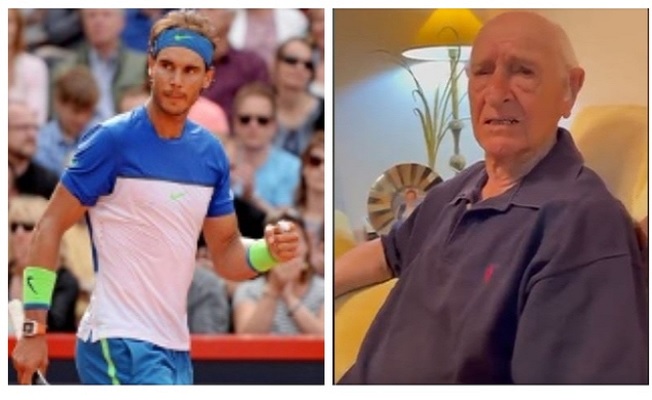 20-time Grand Slam champion Rafael Nadal is one of the most generous sports personalities in the world. That is why not only fans admire him but even his fellow athletes. Recently, the Spaniard added another reason to adore him as he made his 90-year-old fan’s birthday unforgettable.

Without any doubt, Nadal is the GOAT when it comes to helping someone or making somebody’s day. So naturally, when people contacted him regarding the birthday of one of the oldest fans, he was all in. Interestingly, this time, the 35-year-old talked on the video call with his fan, who later broke down in tears of joy.

Rafael Nadal surprises a 90-year-old fan on his birthday
For a loyal sports fans, it is a fantasy fulfilled to interact one-on-one with their favorite player. Notably, the same happened with Rafael Nadal‘s 90-year-old fan, who was surprised to see the tennis legend on his mobile phone.

In the video shared on Twitter, the fan gets emotional after listening to Nadal congratulating him. Unquestionably, it would be one of the most cherishable moments of his life.

The video was captioned, “Eternally grateful to Rafael Nadal and everyone who has helped make his 90th birthday unforgettable. I hope you understand that I will leave the video in private. I show you his reaction.” Indeed, it is not the first time Nadal has gone out to make his fan’s day memorable. Earlier, he even granted the wish of his 95-year-old fan, an Alzheimer’s patient, visiting her after his Madrid loss.

When will Nadal return on the tennis tour?
Unfortunately, Nadal aggravated his persistent foot injury during his French Open semifinal battle against Novak Djokovic. Since then, he’s been in recovery mode.