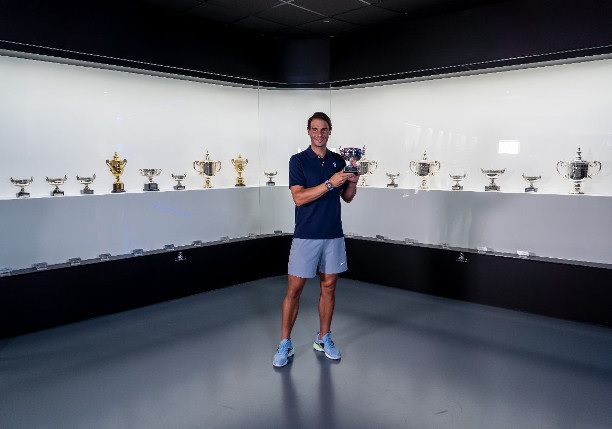 ‘The King of Clay’ – Rafael Nadal has many milestones to his name. The only man to have won 11 Grand Slam majors at a single Grand Slam event is also the holder of many unique and one of a kind records. The teenaged Nadal who beat Mariano Puerta at the 2005 French open final has made giant strides since then and has firmly secured a place among the games’ greatest. As Nadal continues to strive for even more greatness, we take a look at some of his other records

#1 Olympic Gold medals in both singles and doubles

The southpaw from Mallorca, Rafa Nadal is the only player in tennis history to have won Olympics Gold in both singles as well as doubles. At Beijing Olympics in 2008, Rafael Nadal won Gold by beating Chilean Fernando Gonzalez in straight sets 6-3, 7-6, 6-3. At the Rio Olympics 2016, Rafael Nadal erased the pain of losing his singles bronze medal match against Kei Nishikori by winning Gold with his doubles partner Marc Lopez. The two Spaniards beat Romania’s Florin Mergea and Horia Tecau in a tightly fought match 2-6, 6-3, 6-4.

From winning Roland Garros at the tender age of 19, Rafael Nadal’s career trajectory made giant leaps. In quick succession, he won titles at Wimbledon and the Australian Open and on September 13th, 2010 he made history by becoming the youngest man to have completed a ‘Career Slam’ by winning the US Open defeating Serbian Novak Djokovic in the final. Nadal was 24 years, 3 months and 10 days old when he achieved the feat a good 3 years younger than Roger Federer who held the record at the time.

#3 Only man to complete ‘The Clay Slam’

The greatest clay-court player of all-time fittingly holds the record for being the only person in the history of tennis to have completed ‘The Clay Slam’. This includes winning the French Open and the ATP Masters 1000 events on the clay surfaces of Monte Carlo, Rome and Madrid. Rafael Nadal achieved this feat in 2010. He is also the only player to have completed both ‘The Clay Slam’ as well as ‘The Summer Slam’. ‘The Summer Slam’ includes winning the Canadian Open, Cincinnati Masters as well as US Open in the same year. Nadal achieved this in the same year, 2010.

#4 Consecutive titles at any single tournament

The winner of the most number of ATP Masters 1000 titles at 35, Nadal also holds the record of winning the most Masters 1000 matches – 362 and featuring in the most number of finals – 49. Between the periods 2005 – 2014 inclusive, Nadal managed to win at least 1 ATP Masters 1000 title every year. It started with his very first ATP Masters Series title at Monte Carlo Masters 2005. He beat Argentine Guillermo Coria in the final. The streak ended in 2014 when he won the Madrid Masters beating Japan’s Kei Nishikori in the finals.