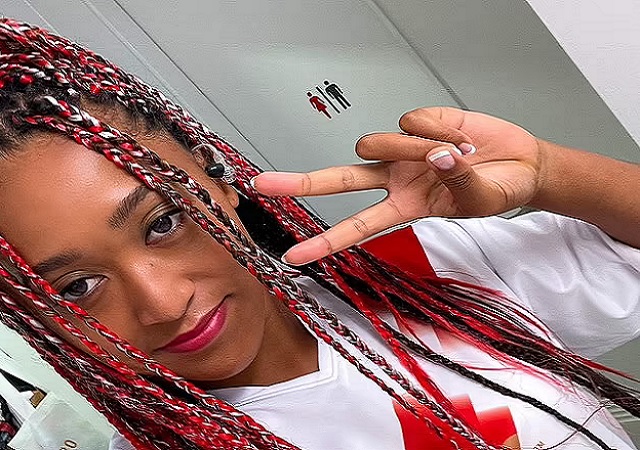 Tennis pro Naomi Osaka has returned to Instagram for the first time since her disappointing third-round defeat at the Olympics to offer a behind-the-scenes glimpse at her time in Tokyo. The 23-year-old, who suffered a shock straight-set loss to the Czech Republic’s Marketa Vondrousova last month, posted a series of images and videos taken during the Olympics, however she declined to open up about the devastating defeat.

Osaka’s post, which was simply captioned ‘a Olympic collage’, began with a heavily made-up seflie that appears to have been taken on the day of the Opening Ceremony, during which the tennis pro was given the honor of lighting the Olympic torch. In the snap, the sports star is modeling a bold pink lipstick, her Tokyo 2020 Torch Relay T-shirt, and bold red braids, while flashing a peace sign at the camera.

Another candid snap in the carousel shows Osaka FaceTiming her dog at home – and she also included a photo of herself enjoying some local cuisine, while making a rather guilty-looking expression. The tennis star did include one shot of herself during a match, but the majority of the images in the post focused on her free time away from the courts – of which she had much more than many people were expecting.

Osaka had gone into the Olympics as a favorite to win the gold medal, particularly after Serena Williams, one of her biggest rivals, made the decision to withdraw from the competition amid concerns over COVID-19 and athlete safety.

Her medal dreams were quickly dashed however when she was beaten by Vondrousova in straight sets, with the Czech player hammering home her first 6-1 set win in just 24 minutes. The Olympics marked Osaka’s first return to the court since she made the decision to drop out of both the French Open and Wimbledon because of struggles with her mental health.

Following the match, Osaka – who is ranked number two in the world and boasts four Grand Slam wins – admitted that the pressure of the Olympics, where she competed for Japan, had been too much for her to cope with, telling the media that ‘the scale of everything’ had been ‘a bit hard’ for her, particularly after the break she took.

‘I feel like I should be used to (the pressure) by now,’ she said. ‘But at the same time, the scale of everything has been a bit hard because of the break that I took. I am glad I didn’t lose in the first round at least.’

When a Japanese journalist then asked, ‘How do you feel?’ Osaka came close to tears. Unable to respond, she left the mixed zone, accompanied by her agent.

The tennis star has yet to offer any more details about the match and her thoughts on her disappointing performance at the Games, however she took a thinly-veiled swipe at her critics on Twitter in the days after the loss, writing: ‘Never let anyone’s opinions or comments influence how you view your own life and priorities.’

Gallery: Beautiful Pictures of Roger Federer And His Family.